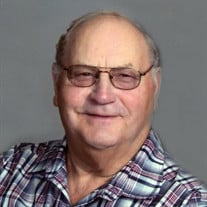 The public funeral service for Marvin Pooler of Parkers Prairie, will be held at 11:00 a.m. on Wednesday, February 24, at Immanuel Lutheran Church in Parkers Prairie, with the Reverend Dr Karl Weber presiding. To attend virtually, the church will have the service live on Facebook, and will be broadcast to their parking lot on 105.3FM radio station. A public visitation will be held at Immanuel Lutheran Church on Tuesday from 5:00-7:00 p.m. and will resume at the church on Wednesday from 9:30 a.m. until the time of the service. Marvin Franklin Pooler, Jr., age 79, was called home to Jesus on February 19, 2021, at his home in Parkers Prairie, MN. Marvin went peacefully from natural causes with the love of his life, Marlene, close by. He remained strong for his family until the very end while showing us his wit and humor every day. Marvin was born February 23, 1941, in Todd County, the son of Marvin, Sr. and Alice (Morrow) Pooler. During his younger years, Marvin lived in Todd County and then St. Paul. It was during these years he discovered his love of woodworking, building, and working with his hands. While growing up in Todd County, Marvin first met his wife of almost 60 years when he was just a boy. Though they did not get along when they were 10 years old, they later found out they were inseparable soulmates. On April 29, 1961, Marvin and Marlene (Erickson) were united in marriage at the United Methodist Church in Eagle Bend. Marvin and Marlene lived a life full of adventure spanning the lower 48 states, Alaska, and beyond. Together they took risks, were the best of friends, and supported each other in every new endeavor. These adventures led them to Alaska in 1965 where Marvin worked construction and plumbing and later became a master plumber and general contractor. Marvin and his young family were seeking a better life and found so much more. It was also during these years in Alaska that Marvin and Marlene discovered their knack for building homes and running a business. Taking another risk, they moved back to Otter Tail County in 1984 to start their home building factory. They were a successful team and the business thrived far beyond their retirement. Retirement for Marvin was almost busier than working with much time spent with his family, which included five grandchildren whom he adored. Marvin also enjoyed his community and being outside; specifically, pheasant and other wildlife club activities, hunting and fishing, camping and exploring the U.S., playing cards, woodworking, dancing, and anything involving his family and friends. Throughout his life, Marvin always had the best stories and sassy retorts. He could put a smile on your face and give you the feeling of being so loved. Marvin will be missed by family and friends near and far. Marvin is survived by his wife Marlene; children, Cynthia (Dale) Rastedt of Ottertail and Tamara (Jay) Ellsworth of Parkers Prairie; grandchildren, Alexander Ellsworth, Ashley (Jeremy) Lardy, Danielle (Mark) Bolland, DeAnna (Josh) Massmann, Zachary (Callie) Malikowski, Anthony (Katie) Ellsworth and Candace Rastedt; 10 great-grandchildren Ethan, Ella, Preston, Everett, Easton, Piper, Aliyah, Emery, Addyson and Natalie; siblings, Lucille Kuehn, Rita Dassner, LeRoy Pooler, David Pooler and Jerry Pooler; and all those who loved him and simply called him Marv. Marvin was preceded in death by his parents; brother Ervin; and sister Mary. We look forward to seeing your smile and hearing your humor in heaven. Love you always. Blessed be the memory of Marvin Franklin Pooler, Jr. Honorary casket bearers will be Ashley Lardy, Danielle Bolland, DeAnna Massmann, Candace Rastedt, Anthony Ellsworth and Alexander Ellsworth. Serving as casket bearers will be Dale Rastedt, Jay Ellsworth, Zach Malikowski, Kenneth Ebnet, Jeremy Lardy and Wally Wiese Jr. Burial will be in Pleasant Mound Cemetery in Clotho, MN.

The public funeral service for Marvin Pooler of Parkers Prairie, will be held at 11:00 a.m. on Wednesday, February 24, at Immanuel Lutheran Church in Parkers Prairie, with the Reverend Dr Karl Weber presiding. To attend virtually, the church... View Obituary & Service Information

The family of Marvin Pooler Jr created this Life Tributes page to make it easy to share your memories.

The public funeral service for Marvin Pooler of Parkers Prairie,...

Send flowers to the Pooler family.