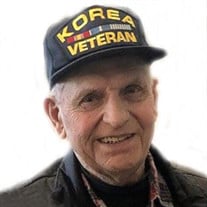 The funeral service for Marvin Runyan will be held at 2:00 p.m. on Saturday, September 26, 2020 at the Immanuel Lutheran Church in Bartlett with Pastor Robin Fish presiding. Visitation will be held at Schuller Family Funeral Homes’ Verndale chapel on Friday from 5:00 to 7:30 p.m. with a prayer service at 7:30. Visitation will continue at the church on Saturday from 12:30 p.m. until the time of service.   Marvin Martin Runyan passed away with family by his side of respiratory complications on Saturday, September 19, 2020 at Lakewood Health Systems in Staples, MN.   Marvin was born to Martin and Bessie Runyan on May 9, 1936 in Bremer County, Iowa. He grew up on a family farm near Nashua, Iowa.  Marvin graduated from Nashua High School in 1954. He volunteered for the draft while in high school. He served in the Army with the Seventh Division in Korea. While there, he taught Korean attack troops how to maintain vehicles and tanks.  He acquired two years of mechanical engineering credits.   He married Mary Hartman on December 28, 1954, while in the service.  After his discharge, Marvin worked for two years as a hired man on a farm east of Nashua.  In 1958 they moved to Verndale, Minnesota where they purchased a 400-acre farm, which consisted of dairying, beef cattle, hogs, and rotation crop farming.  He was a member of the Verndale School Board for eighteen years, while their five children attended and participated in activities.  He was also involved and served on the Soil and Water Conservation District (30 years), Irrigators Association, County Planning Commission, and Todd Wadena Electrical Cooperative.  He was a proud member of American Legion post 366.   Marvin was a successful, master farmer.  He also enjoyed other activities including: gardening, playing cards, reading, fishing, mowing lawn, bird watching, helping Mom with puzzles, and sitting on the bench on the patio. He was a proud spectator of his grandsons and granddaughters playing baseball, basketball, football, volleyball, and other performances and activities. Marvin loved to have his grandchildren and great-grandchildren around. Marvin will mostly be remembered for being a great husband, dad and grandfather. He was a role model for many.  He will also be remembered for his loyalty and service to his country. His hard work and accomplishments have left him “out-standing in his field”.    He is preceded in death by his parents Martin and Bessie Runyan, one sister, Millie (Floyd) Borchert, and one grandson, Brian Runyan.    Marvin is survived by his wife, Mary, son James (Betty) Runyan of Verndale, daughters Ruth (Dan) Hayden of Ada, MN, Elizabeth (Dave) Cecich of Crown Point, IN, Catherine (Steve) Riewer of Wadena, MN, and Margaret (Mark) Ruffino of Deephaven, MN; 13 grandchildren, 12 great-grandchildren, which makes a total of 43 extended family members. He is also survived by brother, Charlie (Pam) Runyan, and sisters, Mary Lynn (Gene) Pleiman, and Margie Runyan, and several nieces and nephews.  Honorary pallbearers will be Amanda (Runyan) Tyrrell, Zarah (Cecich) Fogler, Rebecca (Hayden) Rue, Jason Runyan, Patrick Riewer, Zane Cecich, and Preston Riewer. Serving as pallbearers Eric Runyan, Nathan Runyan, Kenneth Hayden, Michael Riewer, Marcus Riewer, and Zach Cecich. Burial will be in Green Lawn Cemetery in Verndale, MN at a later date.   Military honors provided by William Larson Post 366 American Legion.   Memorials may be directed to Lakewood Hospice and American Forest.

The funeral service for Marvin Runyan will be held at 2:00 p.m. on Saturday, September 26, 2020 at the Immanuel Lutheran Church in Bartlett with Pastor Robin Fish presiding. Visitation will be held at Schuller Family Funeral Homes&#8217; Verndale... View Obituary & Service Information

The family of Marvin Runyan created this Life Tributes page to make it easy to share your memories.

Send flowers to the Runyan family.