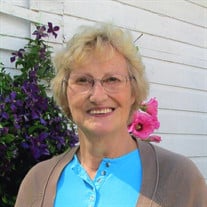 The Mass of Christian Burial for Mary Ann Butzin of Sebeka, will be celebrated at 10:00 a.m. on Saturday, February 15, at St. Ann’s Catholic Church in Wadena, with Father Lauren Germann as celebrant. Visitation will be held at the church on Saturday starting at 8:30 a.m. with the Christian Mothers Rosary at 9:00 a.m. and visitation will continue until the time of the Mass. Mary Ann Irene Butzin, has gone to a new home. She took God’s hand and stepped into eternity. At the age of 82, she passed away peacefully on Thursday, February 6, 2020, at the Green Pine Acres Nursing Home in Menahga, MN, with the gentle care of hospice. Mary Ann was born on December 27,1937 in Wadena, MN to George and Gladys (Lawson) Auel. She grew up on a farm with four brothers and three sisters. She worked as a nanny before meeting Carl Butzin. Their first date was a plane ride over Itasca State Park. They were united in marriage September 21, 1957. They farmed in rural Sebeka, MN where they raised a family of six children. Besides being a homemaker, Mary Ann worked outside the home at Wesley Hospital, Shady Lane Nursing Home, and Green Pine Acres Nursing Home over the years. She was a member of the Christian Women's of St. Hubert's Catholic Church and of the Homemakers Club. Mary Ann enjoyed quilting, (making quilts for each grandchild), gardening, and traveling. She had a circle of friends with whom she enjoyed shopping, Curves, swimming, and eating out. Mary Ann's heart has known the love of her husband Carl, the joy of her children, the celebration of weddings, the magnificent blessing of 20 grandchildren, and 40 great grandchildren. She rocked generations of babies. She journeyed through life with its laughter and tears. Her knees knelt in prayer time after time for those she has loved. She bent her back to gather flowers from her garden and grown old. Because Carl took her hand, family life and love will continue through the generations. Mary Ann was baptized, confirmed, and married at St. Ann's Catholic Church. Mary Ann is survived by her husband Carl, of 62 years together; children, Keith Auel (Anne), Teresa Sakkinen (Larry), Brenda Bower, Ron Butzin (Barb Kiselewski), Don Butzin, Carol Saarela (Erik Johnson), and Vickie Butzin-Schwindel (Bill); brothers, Leonard Auel (Rosalie) and Leroy Auel (Elli); and sister Janice Hofer (Edward). Mary Ann was preceded in death by her parents George and Gladys; siblings Arnold, Eugene, Bernietta, and Genevieve. Honorary urn bearers will be Mary Ann’s grandchildren and great-grandchildren. Serving as urn bearers will be Aaron Sakkinen, Corey Sakkinen, David Bower, Nathan Bower, David Butzin, Dan Butzin, Robbie Tucker, Jared Schwindel, Trevin Schwindel, Jake Auel and Joe Auel. Burial will be in St. Frederick’s Catholic Cemetery, Verndale, MN.

The Mass of Christian Burial for Mary Ann Butzin of Sebeka, will be celebrated at 10:00 a.m. on Saturday, February 15, at St. Ann&#8217;s Catholic Church in Wadena, with Father Lauren Germann as celebrant. Visitation will be held at the church... View Obituary & Service Information

The family of Mary Ann Butzin created this Life Tributes page to make it easy to share your memories.

The Mass of Christian Burial for Mary Ann Butzin of Sebeka, will...

Send flowers to the Butzin family.