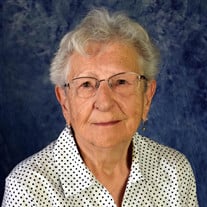 The memorial service celebrating the life of Mary Ann Erckenbrack of Wadena will be held at 11:00 a.m. on Monday, December 11, at the Immanuel Lutheran Church in Wadena, with Pastors Nate Loer and Megan Clapp officiating. Visitation with the family will be held on Sunday at the Johnson-Schuller Chapel in Wadena starting at 4:00 and ending with a prayer service at 6:00 p.m. Visitation will resume at the church on Monday from 9:30 a.m. until the time of service. Mary Ann, age 91, passed away peacefully on Monday, December 4, 2017, at the hospital in St. Cloud, MN, after a recent stroke. Mary Ann was born to Edward and Mary (Windels) Carter on November 25, 1926, in Wadena, MN. She attended elementary school in Compton Township and graduated from Wadena High School with the Class of 1944. She attained her Bachelors Degree in Human Services Administration from Bemidji State in 1980, at the age of 54. Mary Ann was united in marriage with Harvey Arthur Erckenbrack on November 9, 1946, at the Immanuel Lutheran Church in Wadena. They made their home in Wadena where they raised their three daughters. Mary Ann found her professional niche as a coordinator of the Foster Grandparent and Senior Companion Programs at the Brainerd State Hospital. Subsequently, she worked for Wadena County Human Services and the Health Department as a coordinator of Senior Companion Services. Mary Ann was known to family and friends as a woman of clear conviction, progressive ideas and strong advocacy for vulnerable people. She was a trusted confidant for friends, nieces and nephews and was a fun-loving loyal friend and passionate card player! Preceding Mary Ann in death were her husband, Harvey, on September 30, 2005; parents Edward Carter, Mary Carter Danielson and Albin “Dan” Danielson; son-in-law, Glenn St. Marie; granddaughter, Jessica St. Marie; sisters Eunice Chase, Ellen Estes, Wanda Conatser, and Beverly Lawhead. She leaves behind her daughters, Jane Erckenbrack of Wadena, Kay (Kim) Gudmestad of Minneapolis, Nancy Erckenbrack of Vancouver, WA; grandchildren John, William, Antonio, Kai, Tessa, Berit, Tyler and Lee; 10 great-grandchildren; brothers Robert (Gloria) Danielson and Robert Carter; sister Joyce Weis; along with many nieces, nephews and friends. Honorary Pallbearers will be Mary Ann’s grandchildren. Inurnment will be held at a later date in the Wadena Cemetery, Wadena, MN. The family suggests memorials be directed to the Food Shelf of your choice.

The memorial service celebrating the life of Mary Ann Erckenbrack of Wadena will be held at 11:00 a.m. on Monday, December 11, at the Immanuel Lutheran Church in Wadena, with Pastors Nate Loer and Megan Clapp officiating. Visitation with the... View Obituary & Service Information

The family of Mary Ann Erckenbrack created this Life Tributes page to make it easy to share your memories.

The memorial service celebrating the life of Mary Ann Erckenbrack...

Send flowers to the Erckenbrack family.