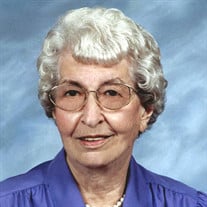 The funeral Mass for Mary Ann Hartman, of Bertha, will be celebrated at 11:00 a.m. on Tuesday, April 3, at the St. Joseph’s Catholic Church in Bertha, with Father Mitchell Bechtold as celebrant. Visitation will be held on Monday from 5:00 until 7:00 p.m. at the Domian-Anderson Chapel in Bertha. Visitation will resume at the church on Tuesday from 9:30 a.m. until the time of the Mass. Two days shy of her 99th birthday, Mary Ann died on March 27, 2018, at the Fair Oaks Lodge in Wadena, MN. Mary Ann was born to Peter M. and Rose (Klinkner) Goeden on March 29, 1919 in Wadena, MN. She attended country schools and later graduated from Verndale High School. On November 13, 1943, Mary Ann and Louis James Hartman were united in marriage in Verndale. She and “Jim” (or “Pappy”, as Jim was known) bought the Hartman family farm east of Bertha. Mary Ann took on additional jobs in the Bertha and Wadena area. Pappy passed away in 1983 and Mary Ann remained on the farm until moving to Humphrey Manor, in Wadena, by 2009. Her health determined that she needed to reside at Fair Oaks Lodge in 2017. Over the years Mary Ann participated in the American Legion Auxiliary, Christian Mothers, Homemakers Club, and Garden Club. She was a natural at canning garden produce and helping on the farm. Mary Ann was especially interested in the history of pioneer life and farming. Most of all, she enjoyed being with her family. Preceding Mary Ann in death were her husband, Jim “Pappy” Hartman; son Robert in 1992; great-grandson Gavin Sutton; parents Peter and Rose; sisters Bernice Larson, Eileen Boyer and Ione Malone. Surviving Mary Ann is her son Jerome “Jerry” (Geny) Hartman of Bertha; eight grandchildren and 14 great-grandchildren; sisters Lorraine Richter of Wadena and Marcella Sharpe of Holmdel, NJ; along with daughter-in-law Joyce Hartman of Bertha. Pallbearers will be Barry Hartman, Bryan Hartman, Robert Hartman, David Hartman, Richard Hartman and John Edwards. Burial will be in the Hewitt Cemetery, Hewitt, MN.

The funeral Mass for Mary Ann Hartman, of Bertha, will be celebrated at 11:00 a.m. on Tuesday, April 3, at the St. Joseph&#8217;s Catholic Church in Bertha, with Father Mitchell Bechtold as celebrant. Visitation will be held on Monday from... View Obituary & Service Information

The family of Mary Ann Hartman created this Life Tributes page to make it easy to share your memories.

The funeral Mass for Mary Ann Hartman, of Bertha, will be celebrated...

Send flowers to the Hartman family.