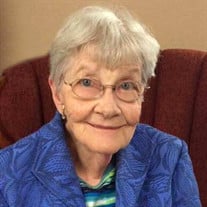 The Mass of Christian Burial for Mary Lehmkuhl of Wadena, will be celebrated at 11:00 a.m. on Thursday, July 27, at the St. Ann’s Catholic Church in Wadena, with Father Aaron Kuhn as celebrant. Visitation will be held at the Parish Hall on Wednesday from 5:00 until 8:00 p.m., with Prayers at 7:00 p.m. Visitation will resume at the church on Thursday from 9:30 a.m. until the time of Mass. Mary Louise (Richter) Lehmkuhl, 85, went home to be with the Lord on July, 24, 2017. Mary was born April 12, 1932, to Peter and Margaret (Hopp) Richter in Wadena, Minnesota. She was united in marriage with Herbert J. Lehmkuhl on November 15, 1950, at St. Ann's Catholic Church in Wadena. The Lord was first in every aspect of Mary’s life. Her faith was extremely important to her and she lived for the Lord every day . She was Christ’s hands and feet and always took the time to pray for everyone’s needs and requests. The motto she lived her life by was “I live simply, so others may simply live.” She exemplified this through selfless giving of her time and resources to so many. She always had a smile and a hug for everyone with whom she came in contact. Mary was a very active and loved member of the community and will be greatly missed. Survivors include sons, Steve of Wadena, Terry (special friend, Darla) of Rockford, Dan (Maryln) of Carlos, Gerard of Wadena, and Brent (special friend, Amy) of Isanti; daughters, Sue (Joe) Parker of Otsego, Mary Lehmkuhl Miller of Cumming, GA, Kathy (Dave) Breuer of Buffalo, Nancy (Rob) Uselman of Ponte Vedra, FL, Jackie Lehmkuhl of St. Cloud, and Monica Lehmkuhl-Snyder of Avon; daughter-in-law Janet Lehmkuhl of Wadena; 34 grandchildren; 33 great-grandchildren; 2 great-great grandchildren; sisters Veronica, Jane and Sophie; and brothers Jim, Jack and Arnie. She was preceded in death by her parents, Peter and Margaret Richter; brothers Ray, Ed “Bud”, Robert “Bob”, and Donald “Don”; sister Eleanor “Ellie”; husband Herbert Lehmkuhl; son Jeffrey “Jeff”; and grandsons Jeremiah and Michael. Folding of the Pall will be done by Ashley Lehmkuhl, Heather Emerson, Jessica Dircks and Mya Snyder. Leah Meyer and Sheila Siler will read scriptures. Offertory Gifts will be brought up by Janet Spreiter and Mary Denny. Honorary Pallbearers will be Mary’s children, grandchildren and great grandchildren. Pallbearers will be grandsons Andy Lehmkuhl, Blake Snyder, Chris Lehmkuhl, Christian Lehmkuhl-Allen, DJ Breuer, Eric Parker, Kwon Miller, Kyle Lehmkuhl, Matthew Lehmkuhl and Nick Uselman. Interment will be in Calvary Cemetery in Wadena, MN. Mary was passionate about helping provide safe drinking water for people in desperate need of clean water. Consider making a contribution in Mary’s name to Water for LIFE using the following link: https://my.lifetoday.org/give

The Mass of Christian Burial for Mary Lehmkuhl of Wadena, will be celebrated at 11:00 a.m. on Thursday, July 27, at the St. Ann&#8217;s Catholic Church in Wadena, with Father Aaron Kuhn as celebrant. Visitation will be held at the Parish Hall... View Obituary & Service Information

The family of Mary Lehmkuhl created this Life Tributes page to make it easy to share your memories.

The Mass of Christian Burial for Mary Lehmkuhl of Wadena, will...

Send flowers to the Lehmkuhl family.