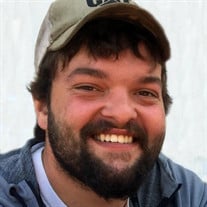 The funeral service for Michael Mousseau of Bertha will be held at 10:30 a.m. on Wednesday, December 6 at the New Life Church of God in Bertha with Pastor Jason Knoll presiding. Visitation will be held at the church on Tuesday at 4:00 until 8:00 p.m. and will resume at the church on Wednesday from 9:00 a.m. until the time of service. Following a tragic work-related accident, Michael, 23, passed away on Thursday, November 30, 2017 at the Tri-County Healthcare Hospital in Wadena, MN. Michael Joseph Mousseau was born on October 28, 1994 in Kailua, HI, the middle child of Bill and Anji (Gilbert) Mousseau. During his youth, he worshipped at the New Life Church of God in Bertha. He was known as the class clown from kindergarten thru his senior year at the Bertha-Hewitt School and graduated in 2013. Michael played football and enjoyed life at M-State Fergus for one crazy year. He then came home to Bertha and had A LOT of jobs before he found the RDO Farm in Wadena. This was a tough, hardworking, outdoor job that he truly loved and gave him great accomplishment in knowing he was providing for his family. Michael will be remembered for his amazing layered personality, smart-alec & quick-witted comments and especially for his kind soul that showed through his huge heart-melting smiles. Michael walked to the beat of his own drum and was quick to make friends wherever he went, whether it was at school, work or really anyone lucky enough to cross his path. Because of that, he was friends with a huge variety of people who looked up to him in every way of life. Michael loved his family unconditionally; especially his fiancé and their amazing little baby girl. Family truly gave his life meaning. He was always proud of his younger brother and extremely happy for his sister and her new husband. He was always the most accepting, trusting and open person, that everyone would talk to no matter the situation- bad or good. Michael loved snuggling with his daughter and making her scream with laughter while untangling her hands from his thick curly beard and most importantly, teaching her the Mousseau growl. He took great pride in loving and pestering his fiancé to no end, cruising in his gas guzzling truck with no destination in sight, deer hunting (mostly hitting them with a vehicle that probably wasn’t his), fishing (there was never any question about who was going to catch the most or biggest fish). He enjoyed playing sports (especially football), ganging up with his brother to exasperate his mom, or kicking back and relaxing with good ole pa- talking about anything and everything under the sun. He was always hanging out with family and friends, watching movies (over and over), going to the “trailer” to play video games or wrestle, and loved eating good home cooked meals. He had so many ‘moms’ that he loved, and they will always hold a place for him in their hearts.   Michael was preceded in death by great grandparents Roland and Rachel (Huppe) Gilbert and Harold and Beverly (Wiley) Hubbard. Michael will be greatly and dearly missed by his daughter Sofia Mousseau and fiancé Sabrina Higley of Bertha; parents Bill and Anji Mousseau of Staples; siblings Ashley (John) Hartung of Minneapolis and Zachary Mousseau currently stationed in Jacksonville, NC; grandparents Norman and Cathy (Twa) Shultz of Henning and Roland I and Ginger (Hubbard) Gilbert of Bertha; great grandmother Barbara LaVaque of Chisholm; along with many aunts, uncles, cousins, other relatives and friends. Fly high Michael. We will always love and miss you. Inurnment will be held at a later date in St. Joseph’s Catholic Cemetery, Bertha, MN.

The funeral service for Michael Mousseau of Bertha will be held at 10:30 a.m. on Wednesday, December 6 at the New Life Church of God in Bertha with Pastor Jason Knoll presiding. Visitation will be held at the church on Tuesday at 4:00 until... View Obituary & Service Information

The family of Michael Mousseau created this Life Tributes page to make it easy to share your memories.

The funeral service for Michael Mousseau of Bertha will be held...

Send flowers to the Mousseau family.