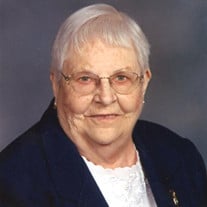 The funeral service for Mildred Soderberg, of Wadena, will be held at 2:00 p.m. on Saturday, March 30, at the St. John Lutheran Church in Wadena, with Pastor Stephen Meltzer presiding. Visitation will be held at the church on Saturday from 12:30 p.m. until the time of the service. Mildred, age 94, passed away on Sunday, March 17, 2019, at Inga’s Place in Bluffton Township, Otter Tail County, MN. Mildred was born to Rudolph William Edward and Clara Emma (Lehmann) Jasmer on August 3, 1924, in Verndale, MN. She graduated from the eighth grade in a ceremony held June 17, 1939, in the Long Prairie High School auditorium. Mildred was united in marriage with Raymond Emanuel Soderberg on April 7, 1946, in the Immanuel Lutheran Church, Bartlett Township, where she had also been baptized and confirmed in earlier years. Mildred and Raymond farmed near Bluffton (1946-78), and then made their home in Wadena. By 1998, they moved into Humphrey Manor. After Raymond passed away in 2002, Mildred remained there until moving to Little Bit of County in 2015, before moving two years later to Inga’s Place, where she remained until her death. Over the years, Mildred enjoyed tending to her flower and vegetable gardens, bird watching and caring for her dog. She loved time spent with others at the church Bible study, at the Chapel Communion, and with members of the Stitch and Chatter Quilting group. Most of all, she treasured time spent with family and friends. Mildred was preceded in death by her husband, Raymond; parents, Rudolph and Clara; brothers, Marvin, Lawrence, Fredrick, Lester and Benjamin Jasmer; and sister Elise “Alice” Hahn. Surviving Mildred are her daughters, Sharon (Alan) Fenner of Browerville, Vicky (Wayne) Mills of Verndale, and Debra Payne of Apple Valley; grandchildren Troy (Denise) Mills, Stacy (David) Peterson, Kortney (Marcus) Columbus and Ashley (Christian) Roloff; 10 great-grandchildren; brother Charles (Charlene Motschenbacher) Jasmer of Verndale; and sisters-in-law Margaret Farber, Linda Jasmer and Evelyn Soderberg; brother-in-law Clayton Hahn; along with many nieces and nephews. Pallbearers will be Troy Mills, Stacy Peterson, Kortney Columbus, Ashley Roloff, Wayne Mills and Alan Fenner. Burial will be in Wadena Cemetery, Wadena, MN.

The funeral service for Mildred Soderberg, of Wadena, will be held at 2:00 p.m. on Saturday, March 30, at the St. John Lutheran Church in Wadena, with Pastor Stephen Meltzer presiding. Visitation will be held at the church on Saturday from... View Obituary & Service Information

The family of Mildred Soderberg created this Life Tributes page to make it easy to share your memories.

The funeral service for Mildred Soderberg, of Wadena, will be...

Send flowers to the Soderberg family.