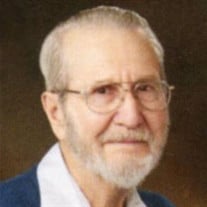 The Memorial Mass for Milton “Milt” Cunningham of Wadena, will be celebrated at 11:00 AM on Friday, April 27, at St. Ann's Catholic Church, with Father Aaron Kuhn as celebrant. A visitation will take place at the church from 9:30 AM until the time of Mass. And will include a Rosary at 10:00 a.m. At the age of 83, Milton passed away with family by his side at the Grand Arbors Assisted Living by Knute Nelson in Alexandria on April 20, 2018. Milton (Milt) Cunningham was born to Charles and Laura (Pratt) Cunningham, in Cresbard, SD on February 24th, 1935. He attended a prairie schoolhouse where his lifelong passion for reading began. After high school, he served in the US Army from 1954-56. While on leave, he met his wife of 60 years, Delores Barondeau, and swept her off her feet on the dance floor of the Onaka Town Hall with his enviable dance moves. They were wed on September 17, 1957 at St. John the Baptist Church in Onaka, SD and were blessed with 5 children. Side by side, they farmed near Cresbard, living close to the land, raising livestock and producing bountiful vegetable gardens. Milt had a true affinity with animals and often told of his pleasure in the quiet stillness of a cold spring morning witnessing the birth of a calf or lamb. Milt enjoyed other bounties of nature through hunting, trapping and fishing and used his resourceful nature in the hobbies of reloading, fly fish tying and taxidermy. He had a gift for rhythms and music and loved to improvise on the harmonica or guitar with his older brother on the banjo. His make-it-yourself philosophy of life was an example to many of how a home grown, handmade, self-sufficient life reveals that the more simple we are, the more complete we become. In 1976, the awe of the woodlands brought Milt and his family to Minnesota, where he farmed north of Wadena and also worked as a pressman at Homecrest, until his retirement in 1997. Then he’d be found at his woodcarving bench, reading, trying to out-fish Delores on Pelican Bay, playing cards with friends, and stewarding nature by planting hundreds of trees. Milt will be remembered for living his faith through his love of family, friends, and serving as surrogate dad to nieces, nephews and friends who had lost parents; for his neighborliness, volunteerism, and awareness of the hand of God in the natural world. Milt was preceded in death by his spouse, Delores on November 4, 2017; parents Charles and Laura Cunningham; infant son, Joseph; brothers Ernest and Robert; sister Leah Cowhick; and canine companion, Sam. He will be forever loved by his surviving family, sons Mike (Nancy) of Lincoln, IL; Mark (Denise) of Concord, NC; Chuck (Anne) of Lidgerwood, ND; Shawn (Kris) of Hutchinson, MN; daughter Lisa (Randy) of Avon, MN; 8 grandchildren, 5 great grandchildren; and sister Rosalie Bowar of Aberdeen, SD. Honorary pallbearers are his grandchildren and great grandchildren. Inurnment will be held at a later date at St. John the Baptist Cemetery in Onaka, SD. In lieu of flowers, memorials are preferred and family suggest they be directed to the Michael J. Fox Foundation for Parkinson’s Research.

The Memorial Mass for Milton &#8220;Milt&#8221; Cunningham of Wadena, will be celebrated at 11:00 AM on Friday, April 27, at St. Ann's Catholic Church, with Father Aaron Kuhn as celebrant. A visitation will take place at the church from 9:30... View Obituary & Service Information

The family of Milton Cunningham created this Life Tributes page to make it easy to share your memories.

The Memorial Mass for Milton “Milt” Cunningham of Wadena, will...

Send flowers to the Cunningham family.