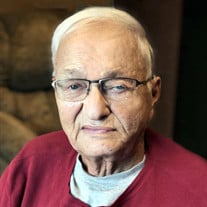 The memorial service celebrating the life of Myron Beach of Eagle Bend will be held at 2:00 p.m. on Friday, May 13 at the Immanuel Lutheran Church in Eagle Bend. A gathering of family of family and friends will held on Friday from 12:30 p.m. until the time of the service. Myron, age 85, passed away on March 7, 2022, at the St. Williams Living Center in Parkers Prairie, MN.  Care was provided by the staff and Douglas County Hospice. Myron was born to George and Gladys (Hoosline) Beach on April 8, 1936, in Leslie Township, Todd County, MN. After completing high school, Myron entered the US Army where he served his country until his honorable discharge in February 1958. In November of that year, he married Dorothy Minnie Riedel in Otter Tail County. They made their home in the Eagle Bend area while Myron worked for over 30 years with Land O’ Lakes as an award winning butter maker. He also was employed driving delivery truck with Braaten Sand & Gravel. Time away from work found him on his hobby farm, going to a casino, or for drives in the countryside. Other favorite past-times included bowling, racing, deer hunting and watching tractor pulls with his grandsons. Days at Lake Chippewa and time spent with his family brought him the most gratification. Myron was a member of the Eagle Bend Lions Club, the American Legion, and the VFW where he participated on the Honor Guard. He was also a past Elder at Immanuel Lutheran Church in Eagle Bend. After Dorothy passed away Myron met and married Victoria LaDue on September 22, 1990. They raised their children to love God, family, and Country as they installed, by example, a good work ethic. Blending families was easy as everyone wanted happiness for their parents. Myron was a caring, gentle man who worked hard all his life and loved to have a beautiful landscaped lawn. Preceding Myron in death were his first wife, Dorothy (1988); wife Victoria (2002); parents, George and Gladys; brothers, Norman and Roger; and brothers-in-law and sisters-in-law. Surviving Myron are his children, Jeanette (Marin) Hansen, Sherrie (Don) Erickson both of Eagle Bend, Randy (Debbie) Beach of Rogers, Shaun (Amy) LaDue of Victoria, Tanya Egeness of Browerville and Justin LaDue of St. Cloud; 14 grandchildren and 15 great-grandchildren; siblings, Dennis (Karen) Beach of Osakis, Terry (Edna) Beach of Eagle Bend, and Alan (Sheryl) Beach of Clarissa; and mother-in-law, Frances Nielson of Iowa. Honorary urn bearers will be Myron’s grandchildren and great-grandchildren. Burial will be in Immanuel Lutheran Cemetery, Eagle Bend, MN.

The memorial service celebrating the life of Myron Beach of Eagle Bend will be held at 2:00 p.m. on Friday, May 13 at the Immanuel Lutheran Church in Eagle Bend. A gathering of family of family and friends will held on Friday from 12:30 p.m.... View Obituary & Service Information

The family of Myron Beach created this Life Tributes page to make it easy to share your memories.

The memorial service celebrating the life of Myron Beach of Eagle...

Send flowers to the Beach family.