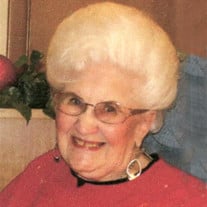 The funeral service for Naomi (Johnson) Brust of Wadena will be held at ll:00am on Feb 1, 2020 at Joyful Spirit United Methodist Church/First Congregational United Church of Christ with Pastor Amy VanValkenburg presiding. Visitation will be held at the Johnson-Schuller Chapel in Wadena on Jan 31, 2020 from 4:00pm to 7:00pm. and at the church on Saturday from 9:30 am until the time of the service. Naomi at the age of 96 passed away on Jan 25, 2020 in Wadena, MN. To happy loving Christian parents, Naomi was born March 25,1923 in New Ulm, Brown County, MN. She was the first born child to Verne Alexander & Ruth Ethel (Dannheim) Johnson. Naomi was baptized on August 30, 1923 at the Methodist Episcopal Church in New Ulm by Pastor Christian Hohn, witnessed by her grandmother Elizabeth Dannheim and her folks Verne & Ruth Johnson. Naomi's brother Thorval Verne Johnson was born April 4, 1927. Naomi was confirmed on Palm Sunday, April 14, 1935 in the First Methodist Episcopal Church in New Ulm, MN by Pastor William Gillmann. She attended a country school in Klossner, MN where they lived and her Dad was the manager & butter maker at the Klossner Creamery. In the 8th grade she attended school in New Ulm where she stayed with her Grandmother Elizabeth Dannheim during the week. Naomi de-tasseled corn which wasn't her favorite thing to do because she was busy looking for snakes. She loved gymnastics, enjoyed roller skating and 4H. She took piano lessons per her mother's wish, but she would rather it had been voice lessons. Naomi enjoyed the clarinet and played in the band. She graduated from New Ulm High School in 1941. As a blue-eyed brunette, she caught the eye of Marvin Brust at a dance at the Klossner Community Center. Marvin and Naomi were married September 7, 1940 in Estherville, Iowa. Eleven months later their son Vern Marvin Brust was born in New Ulm, MN. They had moved to St. Peter where Sandra Kay was born. Marvin was a guard at the St. Peter Prison and an automotive mechanic at Holger Anderson Chevrolet garage. Marvin got an automotive mechanic job back in New Ulm and eleven months later Bonita Faye was born and one and half years later Roxanne Marie was born. They moved to Wadena in 1947 when Marvin got an automotive mechanic job at Minnesota Motors. Naomi's parents had also moved from Klossner to Wadena in 1946 and started the Wadena Cabins Court, later called Wadena Motor Court, where they had a trailer park on their land. After all the cabins, laundry room, rest rooms and trailer park were built, Verne & Ruth (Naomi's parents) moved back to New Ulm. It was then that Marvin & Naomi and Naomi's brother Thorval and his wife Delores Johnson took over the Wadena Motor Court and lived in the big house. Naomi was very active in her church. In her younger years she and Marvin taught Sunday School. Naomi belonged to Naomi Circle, United Methodist Women's Stonecroft Bible studies and numerous other Bible studies. Naomi was the Emma Norton Representative, Altar Guild to help care for flowers, and sang in the choir and for many funerals. She belonged to the Quilters group and was a member of 20th Century Club of Wadena. Naomi and church friends made visits to people at Fair Oaks Nursing Home. Naomi, Marvin, Naomi's brother Thorval & his wife Delores Johnson took over the Johnson century farm near Klossner from her parents when they passed on and rented it out for many years, as did her folks. When they sold it in 1957, both families built new homes in Wadena. Naomi was still living in her home. In the 60's when her girls were in high school and Vern graduated, Naomi took a job at Pansy's Dress Shop. From there she went to the Red Owl as a cashier and later to Super Valu as a cashier. Naomi and Marvin enjoyed camping and fishing with friends and the Holiday Rambler Club. The club met at different places each year for their rally. They traveled all over the U.S. with their trailer and enjoyed the beauty of this country. Every year they would attend the Johnson Reunions in August in New Ulm. Naomi enjoyed embroidering on pillowcases for her children and the grandchildren. She enjoyed making quilts with the quilters at her Methodist Church. She was always ready to play a card game. Even played many card games and other games on her computer. For many years she played 7 deck Canasta cards at the hotel. She loved to read books and most of all enjoyed adult coloring books and colored many pages in numerous books. She belonged to the Senior Center and helped with card making which she used when visiting people at Fair Oaks. Naomi will remain in the hearts of her four children; Vern (Kathy) Brust of Rice Lake, WI, Sandra (Barry) Pratt of Wadena, MN, Bonita (Jerry) Orr of Alexandria, MN and Roxanne (Steve) Austin of Cascade, MT, 8 grandchildren, 15 great-grandchildren and 11 great-great-grandchildren along with many nieces and nephews and extended family and friends. Naomi & Marvin (her loving husband) were married 69 years, ten months when Marvin passed away in July 24, 2010. She was preceded in death by her parents Verne & Ruth Johnson, her beloved husband Marvin Brust, brother, Thorval Johnson, sister-in-law Delores Johnson. Honorary Pallbearers will be all of Naomi's grandchildren, great-grandchildren and great-great-grandchildren and grand son-in-law Jim Hukill. Active pallbearers will be Barry Pratt, Jerry Orr, Steve Austin, Shaker Samuel, Eric Frankhouser, and Tim Yotter. Burial will be next to her husband in the Wadena Cemetery.

The funeral service for Naomi (Johnson) Brust of Wadena will be held at ll:00am on Feb 1, 2020 at Joyful Spirit United Methodist Church/First Congregational United Church of Christ with Pastor Amy VanValkenburg presiding. Visitation will be... View Obituary & Service Information

The family of Naomi Brust created this Life Tributes page to make it easy to share your memories.

The funeral service for Naomi (Johnson) Brust of Wadena will...

Send flowers to the Brust family.