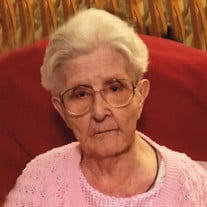 The Mass of the Christian Burial for Norene Murray will be celebrated at 11:00 a.m. on Friday, June 22, at St. Ann's Catholic Church with Father Aaron Kuhn as celebrant. A visitation will be held from 5:00 - 8:00 p.m. on Thursday, June 21, at the Johnson-Schuller Chapel in Wadena, with a Christian Mother's Rosary at 6 p.m. and Parish Prayers at 7 p.m. Visitation will continue on Friday from 9:30 a.m. until the time of service at the church. Norene Kathryn (Geiser) Murray, age 93, passed peacefully on June 17 , 2018, at her home in Wadena, MN, where she had lived for 75 years. Norene was born to Hubert and Kathryn Geiser on September 24, 1924, in Bluffton Township, MN. She attended school through eighth grade before working as a cook in Wadena restaurants. Norene was united in marriage to Asher Charles Murray on February 16, 1943, and settled on the farm in Wadena, MN, where they raised seven children. They were active in the Wadena Area Saddle Club, taking part in trail rides, barn dances, and picnics. Norene worked as a cook at St. Ann’s School in Wadena for many years. Cooking and baking were her specialties. Her homemade breads, cakes, and cookies were favorites of students, family, and friends. She also had a large garden where she raised pickles for the Pickle Factory. She was active in the Catholic Christian Mother’s Society, Ladies Aid Circle, and Sewing Circle. She enjoyed making quilts, especially baby quilts. Norene was preceded in death by her husband, Asher C. Murray, son, Joseph Murray, parents, Hubert and Kathryn Geiser, and brothers, Hubert, Robert, James, and Harold Geiser. She is survived by her children, Mary K. Murray, James (Renee) Murray, daughter-in-law Dixie Murray, Barbara Murray, Susan (John) Scheiding, Asher W. Murray, Norene (Timothy) Wilson, 12 grandchildren, 19 great-grandchildren, and one great-great-grandchild. Pallbearers will be Paul Murray, William A. Murray, Scott Murray, Daniel Murray, Michael Geiser and Robert Geiser. Burial will be in Calvary Cemetery, Wadena, MN.

The Mass of the Christian Burial for Norene Murray will be celebrated at 11:00 a.m. on Friday, June 22, at St. Ann's Catholic Church with Father Aaron Kuhn as celebrant. A visitation will be held from 5:00 - 8:00 p.m. on Thursday, June 21, at... View Obituary & Service Information

The family of Norene Murray created this Life Tributes page to make it easy to share your memories.

The Mass of the Christian Burial for Norene Murray will be celebrated...

Send flowers to the Murray family.