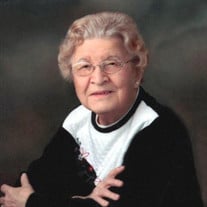 The Mass of Christian Burial for Odila Myott of Sauk Rapids and formerly of Wadena, will be celebrated at 11:00 a.m. on Tuesday, July 20, at St. Ann’s Catholic Church in Wadena, with Father Aaron Kuhn as celebrant. Visitation will be held at the church on Tuesday, beginning with a Rosary at 9:30, and visitation will continue until the time of the Mass. Odila E. Myott, age 101, passed away from a stroke on July 12, 2021, in Sauk Rapids, MN, her home in recent years after living over 93 years in Wadena, MN. Odila Ethelreda Busche was born on Nov. 21, 1919, to John Henry Busche and Mary Frances (Tigges) Busche at her parents’ farm outside of Wadena. She attended St. Ann’s Grade School and Wadena High School, graduating in 1937. An excellent music student, she studied and performed piano, organ and voice. She won a piano scholarship to the College of St. Benedict, which she attended from 1937-1941, graduating in 1941. Odila taught English and music at Albany High School from 1941-1943. During that time, she met Edmund (Ed) Myott and married him on June 21, 1943. Over the next 18 years they had 7 children. She also began her career teaching generations of piano students, became director of the St. Ann’s Catholic Church choir, played organ and piano for thousands of masses (she first played organ at St. Ann’s before she was 16 and played the final time after she turned 90) and led and participated in many church and civic organizations and activities. Odila also helped out at Ed’s grocery stores and sang on KWAD radio for a couple of years in the 1940s. She was President of the St. Cloud Diocesan Council of Catholic Women from 1985-87 and was awarded the Diocese of St. Cloud Medal of Merit in 1986. She was cheerful no matter her workload and had a great sense of humor. Her life centered on faith, family and music and she was rewarded with a long, fulfilling life with many descendants and friends.  Odila was predeceased by her beloved husband Ed; daughter Betty Circle; son John; granddaughter Kara Circle; brother Robert Busche; sons-in-law Danny Circle and Wally Berg; and daughter-in-law Sully Myott.  She is survived by her children, Tom Smith-Myott (Katie) of St. Paul, Marilyn Berg of St. Cloud, Jim Myott (Mona) of Minneapolis, Kathy Sellnow (Tom) of Long Prairie and Pat Myott of St. Paul; sister-in-law Delores Busche; 15 grandchildren Terri Austin, Eric (Leah), Aaron and Sarah Myott, Kathy (Terry), Teresa and Bernadette Circle, Margie and Katie Berg, Will and Hannah Myott, David (Bobbi), Jason (Tracy) and Kyle Sellnow and Kim Whaley; along with 10 great-grandchildren.   Burial will be in Calvary Cemetery, Wadena, MN. Memorials are preferred to St. Ann’s Catholic Church (514 1st St SE, Wadena, MN 56482) or to the College of St. Benedict (37 South College Ave S, St Joseph, MN 56374).

The Mass of Christian Burial for Odila Myott of Sauk Rapids and formerly of Wadena, will be celebrated at 11:00 a.m. on Tuesday, July 20, at St. Ann&#8217;s Catholic Church in Wadena, with Father Aaron Kuhn as celebrant. Visitation will be... View Obituary & Service Information

The family of Odila Myott created this Life Tributes page to make it easy to share your memories.

The Mass of Christian Burial for Odila Myott of Sauk Rapids and...

Send flowers to the Myott family.