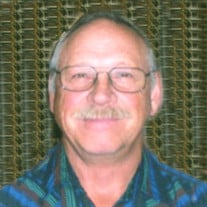 The funeral service for Orn Brissett, of Hewitt will be held at 1:00 p.m. on Monday, September 11, at the Trinity Lutheran Church in Hewitt, with Pastor Robin Fish presiding. Visitation will be held at the church on Monday from 11:00 a.m. until the time of service. After living with Alzheimer’s disease for several years, Orn passed away with family at his side, on Thursday, September 7, 2017 at the Heritage House in Pequot Lakes, MN. He was 75 years old. Orn was born to George and Vera (Beck) Brissett on April 24, 1942 in Park Rapids, MN. He attained his GED and completed a two year Marine and Small Engine Technology program at Detroit Lakes Technical School. He worked as a mechanic and also farmed for a living. Orn was united in marriage with Ardis Zutter on October 31, 1970. In addition, Orn was a peace officer in Hewitt for a number of years. His free time revolved around his boys, gas engines, cars, snowmobile, outboard motors along with 3 and 4-wheelers. He was most proud of his family, and serving his church as an elder and as a chairman for many years. Orn was preceded in death by his parents George Brissett and Vera Brissett-Broten; brothers Arthur, Martin and Maynard Brissett; and sisters Deloris Parks and LaVonne Rautio. The memory of Orn will be held dearly by his wife, Ardis of Hewitt; children Wayne (Gale) Brissett of Hewitt, Christopher Brissett of IA, Joshua (Alicia) Brissett of Alexandria and Terry (Renee) Brissett of OK; numerous grandchildren and great-grandchildren; brother Alfred (Patsy) Broten. Also surviving are special nieces who always met Uncle Orn with hugs and kisses as little girls and now as beautiful women, Lezlie, Dori, Krysti, Etta, Myli, Gina, Bryti, Jenny and Genna. Serving as pallbearers will be Brian Brissett, Richard Glatzmaier, Shane Skarka, Nicolas Zutter, Marshall Zutter, Bobby Chamblin and Jacob Brissett. Burial will be in Trinity Cemetery, Stowe Prairie Township, MN.

The funeral service for Orn Brissett, of Hewitt will be held at 1:00 p.m. on Monday, September 11, at the Trinity Lutheran Church in Hewitt, with Pastor Robin Fish presiding. Visitation will be held at the church on Monday from 11:00 a.m. until... View Obituary & Service Information

The family of Orn Brissett created this Life Tributes page to make it easy to share your memories.

The funeral service for Orn Brissett, of Hewitt will be held...

Send flowers to the Brissett family.