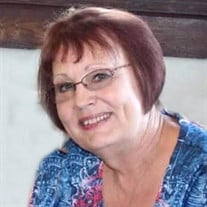 The Mass of Christian Burial for Paula Discher of Eagle Bend, will be celebrated at 11:00 a.m. on Wednesday, November 17, at St. Joseph’s Catholic Church in Bertha, with Father Aaron Kuhn as celebrant. Visitation will be held on Tuesday, from 5:00 until 8:00 p.m. at the Domian-Anderson Chapel in Bertha with a Rosary at 5:00 and Prayers at 6:00. Visitation will resume at the church on Wednesday from 9:30 a.m. until the time of the Mass. Days after her 72nd birthday, Paula passed away surrounded by her family on November 12, 2021, at the Alomere Hospital in Alexandria, MN. Paula was born to Henry “Bill” and Angeline (Dahlhauser) Dearchs on November 6, 1949, at the Algona Hospital in Iowa. After high school she continued her education to become a Licensed Practical Nurse. On November 1, 1969, Paula was united in marriage with Gerald “Jerry” Discher in Charles City, IA. She was a busy homemaker who used her time sewing quilts, gardening, traveling, caring for her patients, and participating in the Intentional Christian community of Koinonia. She took time to be in the Foster Grandparent program and had a loving heart for her four-legged pets. She especially loved time spent with her grandchildren. Preceding Paula in death were her husband Gerald (2013); parents Henry and Angeline; brother Leonard Dearchs, and grandson, Dillion Lancaster. Paula is survived by her children, Todd (Wendie) Discher of Danube, Marcia Lieske of Lynchburg, VA, Joshua Discher and Jeremy (Mindy) Discher both of Eagle Bend; 13 grandchildren and 3 great-grandchildren; siblings, Mary (Gary) Schultz, Joyce Balk, Susan (Merle) Bleich, Alan (Jean) Dearchs, John Dearchs, and Jeanne (Bill) Bauhs; along with other family and friends. Honorary pallbearer will be Stephen Countryman. Active pallbearers will be Ryan Countryman, Tylor Discher, Cody Discher, Blaine Countryman, Allison Lieske and Todd Lief. Burial will be in St. Joseph’s Catholic Cemetery, Bertha, MN.

The Mass of Christian Burial for Paula Discher of Eagle Bend, will be celebrated at 11:00 a.m. on Wednesday, November 17, at St. Joseph&#8217;s Catholic Church in Bertha, with Father Aaron Kuhn as celebrant. Visitation will be held on Tuesday,... View Obituary & Service Information

The family of Paula Discher created this Life Tributes page to make it easy to share your memories.

The Mass of Christian Burial for Paula Discher of Eagle Bend,...

Send flowers to the Discher family.