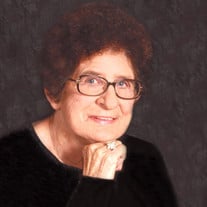 The Celebration of Life memorial service for Phyllis Fisher, of Verndale, will be held at 11:00 a.m. on Wednesday, May 23, at the Verndale Alliance Church in Verndale, with Pastors Tony Stanley and Daryl Jacobson presiding. Visitation with the family will be held at the church on Wednesday from 9:30 a.m. until the time of the service. Phyllis, age 82, passed away with her loved ones at her side, on Tuesday, May 15, 2018, at the Lakewood Health System Hospital, Staples, MN. Phyllis was born to Lee and Susan (Weber) Sowder on March 20, 1936, in Verndale, MN, where she grew up and graduated from high school. She left Verndale for White Sands, NM, to join up with the love of her life, William “Bill” Harold Fisher, who was in the service. While there, they were married on October 6, 1954, and later went to California and Washington. By 1956, they returned home where Phyllis lived until her death. Verndale was special to Phyllis’ heart and she was the town’s biggest fan! Many will remember her as a waitress, musician, school bus driver and local fire warden. She was an active church member and belonged to the Royal Neighbors Club and was a proud Lioness. Phyllis was a great wife, mother, grandmother and great-grandma. She will be lovingly missed by her husband, Bill; children: William Lee Fisher of Alexandria, Timothy Harold (Sally) Fisher of Maple Grove, Danny Lynn (Dawn) Fisher of Verndale, Brenda Sue (Brad) Stinar of Verndale and Dean Michael (Vickie) Fisher of Blaine; 16 grandchildren and 20 great-grandchildren; and a host of neighbors and friends. Preceding Phyllis in death were her parents Lee and Susan; and son-in-law Mark Christianson. Honorary urnbearers will be Phyllis’ grandchildren: Andria, Aaron, Jordan, Landon, Laci, Tyler, Matt, Brett, Danial, Collin, Cole, Chad, Kayla, Alexia, Kennedy and Hunter; and great-grandchildren: Ethan, Chase, Noah, Olivia, Jordan, Landon, Damian, Kendall, Lilli, Madison, Tyson, Jaden, Taya, Sophia, Autumn, Alaina, Kingston, Kaylynn, Kendra, MaKenna, Dawson, and Henley. Burial will be held at a later date. Memorials may be directed to the Verndale Lions Club or Verndale Football Boosters.

The Celebration of Life memorial service for Phyllis Fisher, of Verndale, will be held at 11:00 a.m. on Wednesday, May 23, at the Verndale Alliance Church in Verndale, with Pastors Tony Stanley and Daryl Jacobson presiding. Visitation with... View Obituary & Service Information

The family of Phyllis Fisher created this Life Tributes page to make it easy to share your memories.

The Celebration of Life memorial service for Phyllis Fisher,...

Send flowers to the Fisher family.