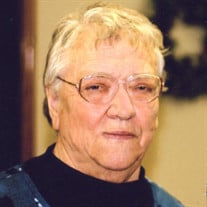 The funeral service for Phyllis Fuller of Wadena, will be held at 2:00 p.m. on Saturday, August 29 at the Wadena Alliance Church in Wadena with Pastor Vaughn White and Pastor Brian Malvig presiding. A visitation for family and friends will be held at the church on Saturday from 12:30 p.m. until the time of the service. Due to COVID restrictions, no meal will be provided. Phyllis Anne Rosendahl was born during a snowstorm April 5, 1932 in Bluffton Township, Otter Tail County, Minnesota. She was the second daughter of Frederick and Sarah Anna (Israelson) Rosendahl. Phyllis attended grades 1-8 at Otter Tail County District #245 and graduated from Wadena High School in 1949. She attended teachers training in Park Rapids, graduating in 1950, and taught in one room schoolhouses in Wadena and Otter Tail Counties for several years. She met the love of her life, Glen Fuller, at the Wadena Alliance Church in 1952. They were married May 29, 1954 in Wadena. She worked alongside Glen farming Rockwood Ranch in Rockwood township for several years. From 1956-1959 they also lived in Beaver Bay, coming home on weekends to work the farm. In 1987 they opened Rockwood Bargains in Wadena, and later moved the business to Staples until closing in 2003. They resided near Sebeka until 1995 when they moved into Wadena. Phyllis returned to Sebeka in March of 2019 to reside at Providence Villa. Phyllis was a member of the Wadena Alliance Church and served several years as a Deaconess. She lived a quiet life with a strong faith, praying fervently for her children and grandchildren. She loved the Lord and accepted Christ as her Savior, desiring the same for all of her loved ones. Reading was a lifelong passion, this and her quiet humor were attributes that she passed on to some of her children. Even in her final weeks she gave her children funny moments to share. Phyllis passed away at the age of 88 years, August 24, 2020 at the Providence Villa in Sebeka, with caring support provided by Knute Nelson Hospice. Phyllis is survived by her six children, Jeff (Nancy) Fuller of Brooklyn Center, Brian Fuller of Verndale, Pamela (Robert) Allebach of Menahga, Glenda Culbreath of Verndale, Troy (Shelly) Fuller of Evansville, and Jillene (Tony) Piemonte of Detroit Lakes; a sister, Linda Anderson of Brainerd; 18 grandchildren and 10 great-grandchildren. She is preceded in death by her husband of 58 years, Glen; her parents, Fredrick Rosendahl, Anna Rosendahl Pierson and step-father Art Pierson; sister and brother-in-law, Doris and Don Berg; and brother-in-law Clint Anderson; father and mother-in-law, Walter and Gladys Fuller; and several extended family members.   Honorary Pallbearers are her 18 grandchildren and 10 great-grandchildren. Serving as pallbearers will be Tommy Fuller, Tyler Fuller, Lucas Fuller, Micah Fuller, Tony Piemonte and Robert Allebach. Burial will be in Leaf River Cemetery, rural Wadena, MN.

The funeral service for Phyllis Fuller of Wadena, will be held at 2:00 p.m. on Saturday, August 29 at the Wadena Alliance Church in Wadena with Pastor Vaughn White and Pastor Brian Malvig presiding. A visitation for family and friends will be... View Obituary & Service Information

The family of Phyllis Fuller created this Life Tributes page to make it easy to share your memories.

The funeral service for Phyllis Fuller of Wadena, will be held...

Send flowers to the Fuller family.