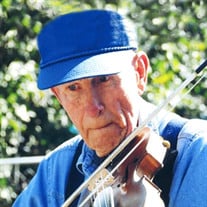 The service remembering the life of Ralph “Hank” English, of Wadena, will be held at 2:00 p.m. on Tuesday, September 29, at the Schuller Family Funeral Homes’ Johnson-Schuller Chapel in Wadena with Pastor Jacob Heppner presiding. Family and friends may gather at the Johnson-Schuller Chapel on Tuesday from 12:30 p.m. until the time of the service. Ralph, age 87, passed away with family at his side, early on September 10, 2020, at his home in Wadena, MN, with gentle comfort provided by Knute Nelson Hospice. Ralph, known as Hank, was born to Edward Brownlow English and Ella Mae (Boswell) English on June 12, 1933, at Adamsville, TN. Hank served as a US Navy Seaman and trained at Whidbey Island, near Seattle, WA, until his honorable discharge in September 1960. At one point in life, Ralph was married and adopted a son, Joel English. The marriage later dissolved. Hank was often on the road sharing his passion for music. He played guitar and fiddle and sang to his heart’s content. Prayer was important in his life, as was being generous and helpful towards others. He enjoyed a good conversation with everyone he met, often making his opinion known. Hank met Doris Reid in 1987, and they were united in marriage on February 15, 2006, in Parker, AZ. Hank was pleased being on-the-road, often in a fifth-wheeler between Arizona and Minnesota. A favorite stop was the 4-Corners Café near Deer Creek, MN. In 1995, he made Wadena his summer home until it became his year-round home in 2018. Hank was preceded in death by his parents Edward and Ella; son Joel; siblings Raymond, Jim, Sammy, Gilbert, Edward, and Bobbie Nell English. Surviving Hank are his devoted wife Doris; and siblings Robert English, Pearl Pickens and Lequette Johnson. Burial will be held at a later date in Woodside Cemetery, near Wrightstown, MN. Military honors provided by the Elmer Goche Post 3922, Veterans of Foreign Wars, Wadena, MN.

The service remembering the life of Ralph &#8220;Hank&#8221; English, of Wadena, will be held at 2:00 p.m. on Tuesday, September 29, at the Schuller Family Funeral Homes&#8217; Johnson-Schuller Chapel in Wadena with Pastor Jacob Heppner presiding.... View Obituary & Service Information

The family of Ralph English created this Life Tributes page to make it easy to share your memories.

The service remembering the life of Ralph “Hank” English, of...

Send flowers to the English family.