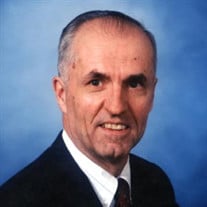 Funeral services for Ralph Stephen Towler, of Edina and Hackensack, will be held at 2:00 PM on Friday, September 11, 2020 at the Verndale United Methodist Church with Pastor Ken Uhren presiding. Friends may call at the church on Friday from 12:30 PM until the time of services. Ralph Stephen Towler died on September 5, 2020 at the age of 85 years at GoldPine Home in Bemidji, MN.  Ralph was preceded in death by his parents, Pete and Florence.  He is survived by his loving wife of 63 years, Murry; his daughters Ann (Gordon) Decker and Carolyn (Darin Miller) Towler; and grandchildren Daniel and Emily. Ralph Stephen was born in St. Paul, MN, on September 7th, 1934. He was the only child of David Kinsman “Pete” and Florence Towler. The family lived in south Minneapolis, where Pete and Florence owned a gift shop, later moving the shop to downtown. Ralph attended Roosevelt High School, and graduated in 1952.   Ralph loved music. He began studying the trumpet at the age of 9 and became a very serious trumpet student in high school. He was  a star pupil of Bernie Adelstein, principal trumpet of the Minneapolis Symphony. Ralph put himself through the University of MN by playing his trumpet professionally. He can be heard on two famous recordings of the Minneapolis Symphony: “The 1812 Overture” and “The Pines Of Rome”.   Ralph graduated with honors from the U of MN with an accounting/law degree in 1959. In 1957, he married Muriel Dickinson in Verndale. Daughter Ann was born in 1959, Carolyn in 1961, and the family lived in St. Louis Park. In 1963, Ralph began a 30 year career with Northern States Power Company, and the family moved to Edina in 1967.  Ralph retired from NSP in 1993. Throughout his career, Ralph was known and respected as a colleague who was intelligent, honest and fair.    In his spare time and in retirement, Ralph loved being active. Sailing, golf, cross country skiing, and long walks with the dog were his special joys. In 1973, Ralph and Murry bought their cabin on Ten Mile Lake, not far from Murry’s childhood cabin. They loved having friends and family over. Ralph especially loved the quiet of the Northwoods and the friendliness and respect of small town folks. Above all else, Ralph was a family man. He loved family gatherings with relatives, and especially enjoyed any event that included his children and grandchildren, Daniel and Emily. He never missed a concert that his daughters or grandchildren were in.   Ralph and Murry had 63 years of marriage together, sharing a special love. Memorable trips to the Rocky Mountains, Hawaii, and the UK were highlights for them, but they also enjoyed a simple day trip in the car, or a nice supper out. They loved to have a meal with their family, including brother-in-law Don and Janet, and Janet’s sister Patsy’s family.     Ralph was kind, sensitive, and a thoughtful man who inspired integrity and wisdom in everyone he knew.   The family would like to thank GoldPine Home and Dr. Mary Salter for all their care through this difficult time. Perhaps Ralph’s life can be best described by this Beatitude from Jesus: “Blessed are the peacemakers, for they shall be called the children of God”. (Matthew 5, Verse 9)

Funeral services for Ralph Stephen Towler, of Edina and Hackensack, will be held at 2:00 PM on Friday, September 11, 2020 at the Verndale United Methodist Church with Pastor Ken Uhren presiding. Friends may call at the church on Friday from... View Obituary & Service Information

The family of Ralph Towler created this Life Tributes page to make it easy to share your memories.

Funeral services for Ralph Stephen Towler, of Edina and Hackensack,...

Send flowers to the Towler family.