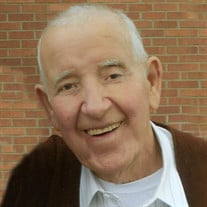 The memorial service and celebration of life for Raymond Savaloja of Wadena, will be held at 11:00 a.m. on Tuesday, March 27, at the First Congregational United Church of Christ in Wadena, with Pastor Jim Stoneman presiding. Visitation will be held on Monday at the Johnson-Schuller Chapel in Wadena from 5:00 until 7:00 p.m., and will resume at the church on Tuesday from 9:30 a.m. until the time of the service. Ray, age 85, passed away with family at his side on March 19, 2018, at the Lakewood Health System Care Center in Staples, MN. Raymond Clifford Savaloja was born to John and Selma (Wirkkala) Savaloja on October 19, 1932 in Sebeka, MN. Ray attended school in Sebeka through the 10th grade then finished high school and graduated from Wadena High School in 1951. Even after graduating from Wadena, he continued to be a part of his senior class in Sebeka and received an honorary diploma. Ray was united in marriage with the love of his life and his best friend, Beverly Lorraine Wohlert, on June 26, 1954 at the Evangelical and Reform Church in Wadena. Ray enlisted in the United States Navy in 1952 where proudly served his country during the Korean War aboard the USS Yellowstone. Ray and Bev were stationed in San Diego and Long Beach, CA. On his deployments, Ray traveled to both Asia and Europe. Ray was honorably discharged from the Navy in 1960. Ray and Bev made their home in Wadena where they raised their three sons, Mike, Steve and Dan. Ray made his career as a truck driver, first with Northern Coop, then with Cenex and finally with Lund Boats. Ray drove more than 3 million miles accident free and was selected as Truck Driver of the Year while driving at Lund. In addition to enjoying time with his family and friends, Ray was an avid outdoorsman and enjoyed fishing, hunting, trapping and floating on the Crow Wing River. Ray was also an accomplished chef and prepared delicious recipes for all to enjoy, especially his famous spaghetti recipe. Ray was a member the First Congregational United Church of Christ where he served in many capacities including on the Worship Ministry and singing in the choir. Ray had a strong faith in God. Ray was also a member of the VFW in Wadena. Ray was preceded in death by his parents, John and Selma; brothers Art, George, Reuben, Harold, Ken and Ben; and his two sisters, Ruth and Bernice. Ray will be lovingly remembered and missed by his wife of nearly 64 years; sons Mike of Boise, ID, Steve (Sheila) of Verndale, MN and Dan (Maggie) of Blaine, MN; grandchildren Bryan (Rhonda), Rachel, Trevor, Tyler (Karli), Wesley, Mason and Jesse; two great-grandchildren, Alexis and Kaitlyn (Bryan and Rhonda); sisters-in-law Shirley Savaloja of Deerwood, MN and Pat Savaloja of Sacramento, CA; brother-in-law; LaVern (Delores) Wohlert of Motley, MN; and many nephews, nieces, friends and relatives. Honorary urn bearers are Ray's seven grandchildren, Bryan, Rachel, Trevor, Tyler, Wesley, Mason and Jesse, along with Jim Hepokoski, John Savaloja, Jeremy Daniels, Dr. Duane Ness, Mike Snyder and Archie Coson. Military honors provided by the Elmer Goche Post 3922, Veterans of Foreign Wars, Wadena, MN. Burial will be held at a later date in the Wadena Cemetery, Wadena, MN.

The memorial service and celebration of life for Raymond Savaloja of Wadena, will be held at 11:00 a.m. on Tuesday, March 27, at the First Congregational United Church of Christ in Wadena, with Pastor Jim Stoneman presiding. Visitation will... View Obituary & Service Information

The family of Ray Savaloja created this Life Tributes page to make it easy to share your memories.

The memorial service and celebration of life for Raymond Savaloja...

Send flowers to the Savaloja family.