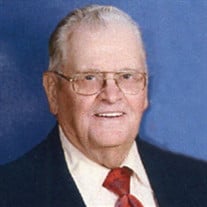 The Celebration of Life memorial service for Raymond Eiswald, of Bertha will be held at 11:00 a.m. on Monday, July 23, at the Faith United Church of Christ in Bertha, with Pastor Dave Seaton presiding. Visitation with the family will be held at the church on Sunday from 4:00 until 6:00 p.m. and will resume at the church on Monday from 9:30 a.m. until the time of the service. With family at his side, Ray, age 88, passed away on Wednesday, July 18, 2018, at the hospital in St. Cloud, MN. Raymond “Ray” was born to Henry Michael and Celina (Pyneart) Eiswald on December 6, 1929, in Perham, MN. As many lads of his era, Ray completed the ninth grade and later entered the armed forces. He served, during the Korean Conflict, in the US Army from July 11, 1952 until his honorable discharge on July 5, 1954, at Fort Sheridan, IL. Ray met Darlene Anderson and they were married on October 19, 1957 in Bertha. They took pride in their family and their farm near Bertha. Ray also enjoyed fishing, hunting, organic farming, and anything “John Deere”! Most of all, Ray treasured time spent with his family. Due to his military service, Ray’s high school graduation was delayed many years until Bertha-Hewitt High School honored him with a diploma. He was a member of the American Legion, the NFO, and served on the council at Faith United Church of Christ. Preceding Ray in death were his parents Henry and Celina; and sisters Eileen Joeb and Ellen Horner. Survivors include his devoted wife, Darlene; son Ken (Rita) Eiswald of Elkin, NC; daughters Jode (Tom) Freyholtz-London of Eagle Bend, Beth (Keith) Grosz of Moorhead, Tracy (Brad) Enger of Hatton, ND, and Jenny (Mike) Marquedant of Bertha; 18 grandchildren, 28 great-grandchildren and 3 great-great-grandchildren; brother Paul (Mavis) Eiswald of Wadena, and sister Carol Venne of Littleton, CO. Honorary urn bearers will be all of Ray’s grandchildren. Military honors provided by Minnesota Army Guard Honor Guard. Burial will be in Peace Evangelical Cemetery, Bertha, MN.

The Celebration of Life memorial service for Raymond Eiswald, of Bertha will be held at 11:00 a.m. on Monday, July 23, at the Faith United Church of Christ in Bertha, with Pastor Dave Seaton presiding. Visitation with the family will be held... View Obituary & Service Information

The family of Raymond Eiswald created this Life Tributes page to make it easy to share your memories.

The Celebration of Life memorial service for Raymond Eiswald,...