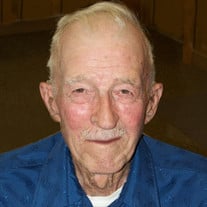 The funeral service for Richard J. Riemer, age 98, of Compton Township, Wadena County, MN, will be held at 3:00 p.m. on Tuesday, November 7, at the St. John Lutheran Church in Wadena with Pastor Stephen Meltzer officiating. Visitation will be held in the fellowship hall at the church on Monday from 5:00 until 7:00 p.m. and will resume at the church on Tuesday from 1:30 p.m. until the time of service. Surrounded by his family, Richard passed away on Wednesday, November 1, 2017 at the Elders Home in New York Mills, MN. Richard John Riemer was born to Fred and Lulu (McGandy) Riemer on October 1, 1919, in Pipestone County, MN. He was baptized at the Evangelical Lutheran Church in Etna, Filmore County, on November 23, 1919, and confirmed into the Christian faith on May 19, 1940, at St. James Lutheran Church in Holland. Rich attended country school and graduated from eighth grade in 1936. Rich was united in marriage with Esther Elsie Buchholz on June 8, 1940 at St. James Lutheran Church in Holland, MN, where they made their home. Rich’s days were filled with the many tasks of a productive farmer. He found great fulfillment when able to do custom farm work for neighbors and friends. Rich was preceded in death by his wife Esther in January 1988; and his parents Fred and Lulu Riemer. He will be remembered by his sons Richard L. (Pauline) Riemer of Perham and Randall (Debra) Riemer of Henning; daughters Joyce (Joe) Kovar of Deer Creek, Jean (Don) Kassube of Anchorage, AK, and Carol (Jim) Guse of Hewitt; 16 grandchildren and 32 great-grandchildren; along with a host of other family, friends and neighbors. Burial will be in Compton Cemetery, Otter Tail County, MN.

The family of Richard John Riemer created this Life Tributes page to make it easy to share your memories.

The funeral service for Richard J. Riemer, age 98, of Compton...

Send flowers to the Riemer family.