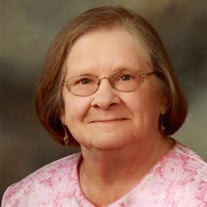 The Mass of Christian Burial for Rita Goeller of Bluffton will be celebrated at 11:00 a.m. on Tuesday, November 7, at the St. John the Baptist Catholic Church in Bluffton with Father Arlie Sowada as celebrant. Visitation will be held on Monday at the Johnson-Schuller Chapel in Wadena from 5:00 until 8:00 p.m. with Christian Mothers Rosary at 5:00 and Prayers at 6:00 p.m. Visitation will resume at the church on Tuesday from 9:30 a.m. until the time of Mass. Rita, age 81, passed away on Tuesday, October 31, 2017, at the Lakewood Health System Care Center in Staples, MN. Rita was born to Anton and Christine (Danelke) Roers on March 24, 1936 in Urbank, MN. After completing high school she worked at a hospital in Alexandria. Rita was united in marriage with James “Jim” Henry Goeller on October 1, 1956. Her days were filled with raising their children on the family farm north of Bluffton. In 1984, they stepped aside from the responsibilities of the farm and moved into Bluffton. Rita found joy in nature when riding bike, walking, bird watching and going for rides in the countryside. She also enjoyed reading, word-search puzzles, and baking. Rita loved time spent with her family, especially her grandchildren. She supported missions with her community of faith. Rita was preceded in death by her husband Jim on January 6, 1997; parents Anton and Christina; son Jeffrey Goeller; brothers Norbert (Shirley) Roers and Werner (Eunice) Roers; sister Norma (Jack) Schecker; parents-in-law George and Susan Goeller; and brother-in-law Murl McGrane. Left with loving memories are her sons Keith (Karen) Goeller, Rodney (Donna) Goeller both of Bluffton, Gary (Kim) Goeller of Huron, SD and Dean (Laurie) Goeller of Ottertail; daughters Nancy (Paul) Schik of New York Mills and Sheri (Nick) Richter of Sartell; 23 grandchildren and 25 great-grandchildren; sister-in-law Kathleen McGrane; along with a host of other family, friends and neighbors. Honorary Pallbearers will be all of Rita’s grandchildren. Active pallbearers will be Michelle Goeller, Jennifer Schwantes, Jackie Horstmann, David Goeller, Kyle Goeller, Alex Goeller, Quincee Goeller and Tarrel Flanigan. Burial will be in St. John the Baptist Catholic Cemetery, Bluffton, MN.

The Mass of Christian Burial for Rita Goeller of Bluffton will be celebrated at 11:00 a.m. on Tuesday, November 7, at the St. John the Baptist Catholic Church in Bluffton with Father Arlie Sowada as celebrant. Visitation will be held on Monday... View Obituary & Service Information

The family of Rita Goeller created this Life Tributes page to make it easy to share your memories.

The Mass of Christian Burial for Rita Goeller of Bluffton will...

Send flowers to the Goeller family.