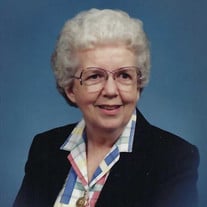 The funeral service for Rita Lund of Apple Valley and formerly of Wadena, will be held at 2:00 p.m. on Monday, September 13, at the Immanuel Lutheran Church in Wadena, with Pastor Nate Loer presiding. Family and friends may gather at the church on Monday, from 12:30 p.m. until the time of the service. Due to Covid–19 and the variants, the family requests that everyone wear a mask. Rita Nadine Current Lund, age 96, passed away on Tuesday, September 7, 2021, at Ecumen Centennial House in Apple Valley, Minnesota due to complications of Alzheimer’s / dementia. Rita was born on November 11, 1924, in Page Township, Mille Lacs County, near Milaca, Minnesota. She was the third daughter born to James Edward Current and Edna Irene Eighmy Current. She joined sisters Garnet and Erna. Two years later, sister Edna completed the family. Rita graduated from high school in 1942. She eventually joined her sister Edna in St. Paul where she found employment with Montgomery Ward and later St. Paul Fire & Marine. Rita met her husband, Arthur Jan Lund in 1949. He was one of the young men that lived at her Aunt Myrtle’s boarding house in St. Paul. They were married in October of 1950. In the spring of 1951, Art was recalled to the Navy, stationed at the naval base in Providence, Rhode Island. Rita flew to Providence to be with him during this time. They made their home in Wadena Minnesota, raising four children. Rita was a devoted wife and mother. She was an excellent baker and cook. Her cookies, bread, hamburger buns, cinnamon rolls, and apple pies were enjoyed at many family gatherings. She took great pride in her home. She was a gardener, growing vegetables and flowers. Her peonies and roses were beautiful. Art and Rita were active members of Immanuel Lutheran Church in Wadena. She was happiest when she was with Art, whether they were visiting family or friends, camping, working in their gardens, or volunteering at church or in the community. They were a team. In February 2011, Art & Rita moved into an assisted living apartment in Farmington. Shortly after their move, Art’s dementia and failing health required that he move into a nursing home, and he passed away in January of 2012. In February 2015, due to Rita’s own declining health, she moved into Ecumen Centennial House. Centennial staff and Hospice were able to continue caring for her as her needs increased. Rita is preceded in death by her husband, Art; parents, James and Irene Current; sisters, Garnet and Erna; and son Steven. She is survived by her children, Kathy (John) Swenson, Wes (Sheila) Lund, and James (Mary) Lund; daughter-in-law, Pat Lund; seven grandchildren, Jennifer (Mike) Cockroft, Tim (Jenni) Lund, Melanie Lund, Crystal Lund, Amanda (Joe) Mrozek, David Swenson & Rachel Swenson; nine great-grandchildren and one great-great-grandchild; her sister, Edna Harrison; several nieces and nephews; and many good friends. Memorials are preferred to Immanuel Lutheran Church in Wadena. The family would like to thank the staff at Ecumen Centennial House and Ecumen Hospice for their care and support. Burial will be next to her husband in Wadena Cemetery, Wadena, MN.

The funeral service for Rita Lund of Apple Valley and formerly of Wadena, will be held at 2:00 p.m. on Monday, September 13, at the Immanuel Lutheran Church in Wadena, with Pastor Nate Loer presiding. Family and friends may gather at the church... View Obituary & Service Information

The family of Rita Lund created this Life Tributes page to make it easy to share your memories.

The funeral service for Rita Lund of Apple Valley and formerly...

Send flowers to the Lund family.