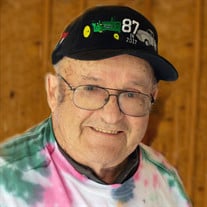 The funeral service for Robert Baker of rural Verndale will be held at 2:00 p.m. on Saturday, January 18, at the Central Methodist Church in rural Verndale, with Bob’s Godson, Pastor Tim Nelson presiding. Visitation will be held Friday, January 17, at the Schuller Family Funeral Homes’ Wadena Chapel from 5:00 until 7:00 p.m. and will resume at the church on Saturday from 12:30 p.m. until the time of the service. Robert, age 89, passed away with family by his side on Thursday, January 9, 2020, at the Tri-County Health Care Hospital, Wadena, MN. Robert “Bob” was born to Douglas and Helen (Buckland) August 20, 1930 at their home in rural Verndale, MN. Robert served during the Korean Conflict in the US Army from 1952 until his honorable discharge in 1954. Robert was united in marriage with Marilyn “Jane” Nelson on August 4, 1954, at the Central United Methodist Church, near Verndale, where they served as dedicated members. He worked on their farm and in the Maintenance Department at Homecrest, Ind. He was also a talented beekeeper, gardener, woodworker and overall handyman for family and friends. Robert was preceded in death by his parents; daughter Robin Crandall (2013); sons Warren “Chip” Baker (2014) and Russell “Rusty” Baker (2015); an infant twin brother Raymond; siblings Arlene Billington, Larry Baker and Norman Baker; brother-in-law Rolland Billington; and sister-in-law LaVonne Baker. Surviving Bob are his devoted wife Jane; children Randy (Nancy) Baker of Hancock, Darrel (Dawn) Baker of Rapid City, SD, Jeanette “Jan” (Vince) Bernu of Deer Creek and Kevin (Tiffany) Baker of Wadena; 26 grandchildren and 21 great-grandchildren; son-in-law Paul Crandall of New York Mills: sister-in-law Maureen Baker, along with many nieces and nephews and a host of friends and neighbors. Honorary pallbearers will be Bob’s grandchildren. Serving as pallbearers will be Zach Bernu, Josh Crandall, Tristian Baker, Isaac Baker, Shem Baker and Ethan Baker. Burial will be in Montrose Cemetery, Thomastown Township, MN. Military Honors provided by the Elmer Goche Post 3922, Veterans of Foreign Wars, Wadena, MN.

The funeral service for Robert Baker of rural Verndale will be held at 2:00 p.m. on Saturday, January 18, at the Central Methodist Church in rural Verndale, with Bob&#8217;s Godson, Pastor Tim Nelson presiding. Visitation will be held Friday,... View Obituary & Service Information

The family of Robert Baker created this Life Tributes page to make it easy to share your memories.

The funeral service for Robert Baker of rural Verndale will be...

Send flowers to the Baker family.