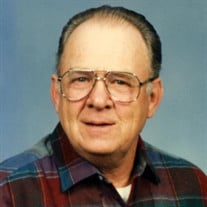 Due to the Covid-19 Virus, the Wilkening family has asked that the graveside service be a private and safe time for them, and to protect you, their friends. (No visitation will be held.) The private memorial graveside service for Robert “Bob” Wilkening of Wadena will be held at the Wadena Cemetery with Pastor Jim Stoneman presiding. Days after his 86th birthday, Bob passed away unexpectedly on August 28, 2020, at his home in Wadena, MN, with his wife, Phyllis at his side. Robert “Bob” Allen Wilkening was born to Arthur and Erna (Holtz) Wilkening on August 18, 1934 in Elgin, IL. Later, the family moved to Webster, WI, where he attended Webster High School. Bob honorably served our country in the US Air Force from 1952-1965. He married Shirley Manhart in Madison, WI. He was widowed and later married Phyllis (Braun) Nicoll in Wadena, MN. After military service, Bob worked for Clean Towel Service, the Madison Bus Co., Norgas, Merickel Hardware, and for Wadena Light and Water Dept as Meter Man for 22 years, often walking up to nine miles a day. After retirement, he worked summers at Whitetail Run Golf course, and winters at Fix’s Family Foods. He also worked part-time for nine years at Tri-County Hospital as patient escort. Service and membership were important to Bob. He served on the Wadena City Council from 1997-2000. He was a life member of VFW Post #3922 and served on the Board, as well as Chairman of the Board, and was a member of First Congregational United Church of Christ. Bob participated in many clubs: Wadena Fishing League, Minnesota Racing Pigeons Club, Mid-Central Roller Pigeons Club, Wadena Model Railroad Club, and the Minnesota Game Breeders Club. He enjoyed many hobbies, as well - breeding of Fancy Pigeons and Fancy Bantam chickens, Model Railroading, model flying airplanes, and keeping tropical fish. Bob will be forever remembered by friends and loved ones for his ability to make you smile and laugh with his quick wit, sense of humor and a mental library of hundreds of jokes! Bob was preceded in death by his parents, Arthur and Erna; first wife, Shirley; daughter Therese Ann; grandson Jesse Lee; and brothers Arthur Jr, Herman, John, and Melvin. Bob is survived by his devoted wife, Phyllis of Wadena; son Dale (Melissa) Wilkening of Deer River, MN; step-children Kathy (Ken) Widmer of Wasilla, AK, Alan Nicoll (Jody) of Crosslake, MN, Randy (Lisa) Nicoll of Avon, MN, and Jeff (JoAnn) Nicoll of Rice; MN, 9 grandchildren and 11 great-grandchildren; along with sister, Ruth Eadler, of Sierra Nista, AZ. Military honors provided by Elmer Goche Post 3922, Veterans of Foreign Wars, Wadena, MN.

Due to the Covid-19 Virus, the Wilkening family has asked that the graveside service be a private and safe time for them, and to protect you, their friends. (No visitation will be held.) The private memorial graveside service for Robert &#8220;Bob&#8221;... View Obituary & Service Information

The family of Robert "Bob" Wilkening created this Life Tributes page to make it easy to share your memories.

Due to the Covid-19 Virus, the Wilkening family has asked that...

Send flowers to the Wilkening family.