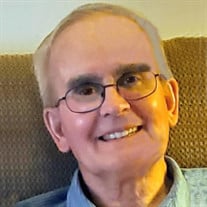 The public Mass of the Christian burial for Robert “Bob” Young of Wadena, will be celebrated at 11:00 a.m. on Saturday, March 6, at St. Ann’s Catholic Church in Wadena, with Father Aaron Kuhn as celebrant. A public visitation will be held at the church on Saturday from 9:30 a.m. until the time of the service. On Saturday, February 27, 2021, Robert (Bob) Joseph Young, lifelong resident of Wadena, MN, passed away suddenly of natural causes at the age of 75. He was born at Wesley Hospital in Wadena on January 4, 1946 to parents, Donald F. Young and Gladys (McDowell) Young. After eight years at St. Ann’s School, Bob attended Wadena High School, graduating in 1964. Shortly after high school he was drafted into the United States Army on July 5, 1966. Bob graduated from the US Army Intelligence school as an interrogator in Oct of 1967. Upon return from Vietnam, he entered North Dakota State University in Fargo, ND, graduating with a BA in Electrical Engineering in 1972, followed by a Master’s Degree. In 1975, he and brother Jerry started a construction business to work their way through school which Bob continued to pursue after Jerry left NDSU. In 1992, Bob was working alone on a second story roof, he passed out and fell to the ground. While in a body cast, Bob was told he would never walk again. Being as determined as he was, he told his mom they were wrong. He became a paraplegic and as soon as he could, he started walking with his cane as much as ten miles every day rain or snow, dragging one leg behind him. He would accomplish anything he wanted to. He even built himself a deer hunting tree stand near home by hauling lumber and tools through the woodsy swamp. Although he suffered almost constant pain and spasms through the years, he never complained. He was quick witted, very intelligent and quiet. His eyes always lit up with a bright smile when he saw his nephews and nieces, who all loved him. When his nephew, Jayson, built the playground for the kids in Wadena as his Eagle Scout Project, Bob was there every day helping and serving as an adult supervisor at all times. Bob would never turn down a family game of cards and was so competitive. Bob was preceded in death by his parents, Donald and Gladys Young; his sister, Pamela Young; his nephew, Mark Young; and two step-nephews. He is survived by sister, Bonnie (Gerald) Munkholm of Vacaville, CA; brothers, Kenneth (Kathy) of Ottertail; James and Gerald of Wadena; niece, Kelly Young of Breckenridge, CO; nephews, Donald Amaya of Reno, NV; Ryan Amaya of Seattle, WA; Kyle (April) Young of Pueblo, CO; Kevin (Angela) Young of Maple Grove; Jayson Young of Fargo, ND; 5 step-nieces and one step-nephew. Serving as pallbearers will be Kyle Young, Kevin Young, Angela Young , Kelly Young, Jayson Young and Jerry Munkholm. Burial will be held on Monday, March 8, in Calvary Cemetery, Wadena, MN.

The public Mass of the Christian burial for Robert &#8220;Bob&#8221; Young of Wadena, will be celebrated at 11:00 a.m. on Saturday, March 6, at St. Ann&#8217;s Catholic Church in Wadena, with Father Aaron Kuhn as celebrant. A public visitation... View Obituary & Service Information

The family of Robert "Bob" Young created this Life Tributes page to make it easy to share your memories.

The public Mass of the Christian burial for Robert “Bob” Young...

Send flowers to the Young family.