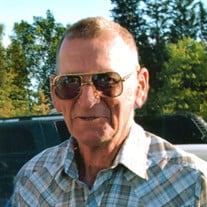 The Celebration of Life memorial service for Robert Lee Johnson, of the Verndale and Blue Grass area, will be held at 2:00 p.m. on Monday, April 16, 2018 at Hope Chapel outside of Verndale, with Reverend Neal Malcore presiding. Visitation will be held at the church on Monday from noon until the time of the service. At home and with family at his side, Robert, age 78, passed away on April 9, 2018, under the gentle care of Knute Nelson Hospice. Robert was born to Clifford Lee and Wilma (Shelton) Johnson on New Years Day in 1940, at Wing River Township, MN. He grew up in the Blue Grass area and attended School District 57 north of Verndale. Bob was united in marriage with Bertha May Patch on January 2, 1960, at Kelliher, MN. They moved from International Falls, MN, to Wolf Point, MT, to follow Bob’s dream of being a cowboy. Among other jobs, he worked as a bulk truck driver, as a gas station attendant, on road construction, and as a carpenter. He also worked for two years on the ambulance crew, was a foster care provider for 14 years, and provided a roller skating rink for the community. Bob was a jack-of-all trades! They moved back to the Johnson homestead in 1980, to care for Bob’s dad and Bertha’s parents. Bob found he loved farming! His hobbies included collecting HO train sets and was a natural at making most anything from scratch. He also belonged to a CB Radio club. Robert was preceded in death by his parents Clifford and Wilma; grandparents Fred and Nina Johnson, and Robert and Liz Shelton. He will be missed by his loving wife, Bertha of Verndale; sons, Denver (Ellie) Johnson of Pillager and Merlyn (Rishell) Johnson of Verndale; daughter, Colleen Johnson of Bertha; 10 grandchildren and 6 great-grandchildren; along with a host of friends and neighbors. Honorary urn bearers will be Jason, Eric, Darren, Justin and Zach Johnson Burial will be held at a later date in the Wing River Union Cemetery, Wing River Township, MN.

The Celebration of Life memorial service for Robert Lee Johnson, of the Verndale and Blue Grass area, will be held at 2:00 p.m. on Monday, April 16, 2018 at Hope Chapel outside of Verndale, with Reverend Neal Malcore presiding. Visitation will... View Obituary & Service Information

The family of Robert Lee Johnson created this Life Tributes page to make it easy to share your memories.

The Celebration of Life memorial service for Robert Lee Johnson,...