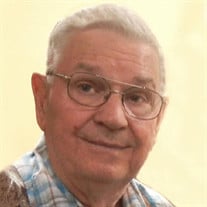 The funeral service for Robert Kempe of Sebeka, and formerly of Verndale, will be held at 11:00 a.m. on Monday, November 25, at the St. John Lutheran Church in Wadena with Pastor Stephen Meltzer presiding. Visitation will be held at the church on Sunday, from 4:00 until 6:00 p.m. and will resume at the church on Monday from 9:30 a.m. until the time of the service. Ten years after the death of his beloved wife Betty, Robert passed away at the age of 87 on Wednesday, November 20, 2019, at the Serenity Living Solutions assisted living home in Sebeka, MN. Caring support was provided by the staff and Lakewood Hospice. Robert “Bob” was born to Michael and Mae (Tranby) Kempe on February 21, 1932, at their home in Otter Tail County, MN. He honorably served in the US Army from May 1953 through April 1955 during the Korean Conflict. Robert was united in marriage with Betty Jane VanMiddendorp on June 11, 1956, at St. Paul’s Lutheran Church in Bertha, MN. He found his livelihood in farming and further enjoyed the outdoors while relaxing with a fishing pole in his hands. Listening to Blue Grass music and playing cards also brought him joy, but it was times spent with his children and following his grandkids in their sporting events that filled him with pride. Robert was preceded in death by his wife Betty on November 17, 2009; and his parents Michael and Mae. Surviving Bob are his sons Bradley (Mary Dee) Kempe of Verndale, and Rodney (Brenda) Kempe of Hewitt; five grandchildren and ten great-grandchildren; along with his sister Bette Peterson. Honorary pallbearers will be Kayla Wenker, Cathy Voge and Robert’s great-grandchildren. Serving as pallbearers will be Jason Kempe, Ryan Kempe, John Kempe, Dave Wenker, Logan Voge and Eugene Boelz. Military honors provided by Elmer Goche Post 3922, Veterans of Foreign Wars, Wadena, MN. Burial will be in Green Lawn Cemetery, Verndale, MN.

The funeral service for Robert Kempe of Sebeka, and formerly of Verndale, will be held at 11:00 a.m. on Monday, November 25, at the St. John Lutheran Church in Wadena with Pastor Stephen Meltzer presiding. Visitation will be held at the church... View Obituary & Service Information

The family of Robert Kempe created this Life Tributes page to make it easy to share your memories.

The funeral service for Robert Kempe of Sebeka, and formerly...

Send flowers to the Kempe family.