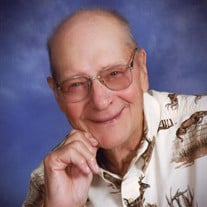 ** Please note change of locations: The funeral service for Robert Schultz of Verndale will be held at 2:00 p.m. on Saturday, April 22, at the Family Life Church in Verndale with Pastor Ken Uhren presiding. Visitation will be held on Friday from 5:00 until 8:00 p.m. at the United Methodist Church in Verndale and will resume at the Family Life Church on Saturday from 12:30 p.m. until the time of the service. Robert, age 80, passed away unexpectedly on April 18, 2017, at his home in Verndale, MN. As written by Bob (May 10, 2006): "I was born on September 12, 1936, in Watkins, MN, at home on the family farm. At birth I was very blue, heart was not doing its’ job so Dad held me in the wood stove oven, to keep me warm until the doctor arrived from town. Remember in those days doctors came to the homes. So if you wonder why I did some foolish things, it’s because I was half baked. I started school, 1st grade, at age five, and attended District #3 until about March, 1943, when my folks bought a house in Litchfield, MN. I attended Lincoln Elementary School (now gone and replaced with apartments). As a 7th grader I went to the high school in Litchfield for six years. I enjoyed school, made a lot of friends, and graduated with approximately 145 classmates. In the fall of 1954, I attended Elmhurst College in Elmhurst, IL. While there, I broke the arch in my foot. Now I couldn’t out run any one if I got into trouble. I left in the spring of 1955 and transferred to St. Cloud State, MN. I wanted to be a civil engineer, but because I didn’t take chemistry in high school, that didn’t work. Therefore, I switched to a math major, minored in psychology, geography and drivers education. In the fall of 1958, I did my student teaching at Mounds View High School. At Thanksgiving break I came to Verndale for an interview and was hired for the position of teaching math. I finished student teaching on December 8, 1958. My teaching career ended, after 34 years, in December 1992. I met my wife, Judy (Ryan) and we were married July 6, 1961. I made a good choice. Judy is a beautiful person. Over the years I had many health problems (2 heart attacks, triple bypass, gallbladder, blocked arteries, and other problems). Whenever this happened, there was Judy, by my side, helping me and encouraging me. Judy is not only my wife, but my best friend. THANKS JUDY! In 1964, we adopted a little guy, named Dan, born November 11, 1964. Then in 1966, we adopted a little girl, named Laura, born June 2, 1966. Both graduated from Verndale. Like any youngsters they were good and drove us nuts on other days. But we’ll keep them. LOVE YOU TWO! Judy worked for the post office and retired in April, 2001. After Judy and I were married we joined the Verndale Methodist Church in 1962. We both have had many jobs, such as organists, Sunday School teacher and many positions on the Ad. Board. Sometime in the 1970s a group of students in my higher math class gave me a new name “Uncle Bob”. This was special to me. Some of the things I’m proud of and felt honored by: in high school I was elected to the National Honor Society; nominated to Who’s Who Among Teachers by former students; had the school Yearbook dedicated to me twice; was a 15 year member of the Verndale Fire Department; was a charter member of the Verndale Lions Club; taught hunter safety classes for over 45 years and snowmobile safety classes for 15 years; was a member of the first archery club in Wadena County “Wing River Bowmen”; then later became a member of the Mit-Ti-Quab Club for at least 30 years. Judy and I were the first Hall of Fame members in the archery club. In 1974, Judy and I started an archery shop and sold it in 2001. Judy and I enjoyed bow hunting and rifle hunting. Along with another couple, we instructed the first ATV class in Verndale in May and June of 2006. Since retiring from teaching I enjoy turning wood into small toys for grand kids and various items made of wood for others. I have lost my father, mother, and three brothers with heart problems so you can see why I was born a blue baby and have had heart problems. My sister Della is gone, too. I have several nephews and nieces, along with several great-great-nephews and nieces. ENOUGH OF THIS. DON’T CRY FOR ME, I’VE HAD A GOOD LIFE AND A GOOD FAMILY. REMEMBER I DON’T ALWAYS GET MAD, I’LL TRY TO GET EVEN. LOVE YOU!" Burial will be in Green Lawn Cemetery, Verndale, MN.

** Please note change of locations: The funeral service for Robert Schultz of Verndale will be held at 2:00 p.m. on Saturday, April 22, at the Family Life Church in Verndale with Pastor Ken Uhren presiding. Visitation will be held on Friday... View Obituary & Service Information

The family of Robert Schultz created this Life Tributes page to make it easy to share your memories.

** Please note change of locations:
The funeral service for Robert...

Send flowers to the Schultz family.