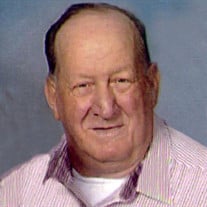 The funeral service for Robert Thorson will be held at 2:00 p.m. on Friday, February 8, at Immanuel Lutheran Church in Eagle Bend with Pastor Justin Hesterman presiding. Visitation will be held at the church on Thursday from 5:00 until 8:00 p.m. and will resume at the church on Friday from 12:30 p.m. until the time of service. In the early hours of February 4, 2019, Robert, age 91, passed away at the Central Todd County Care Center in Clarissa, MN. Robert was born to Leonard and Clara (Mennenga) Thorson on January 16, 1928, in Blue Earth County, near Lake Crystal, MN.   Robert was baptized  and confirmed in the Lutheran faith at Zion in Lake Crystal. He attended and graduated from Felch School District #115, Lake Crystal. He was united in marriage with Erna Emma Schulz on July 21, 1947, at St. John’s Lutheran Church in Willow Creek. They enjoyed 61 years together and were blessed with five children.  Following their marriage they farmed near Winthrop until 1963, then moving to Courtland, MN. In 1976, they settled on a farm in Eagle Bend until his retirement in 1989. Robert loved farming and took pride in the crops he raised.  The real joy in his life was being with his family especially spending precious time with his grandchildren and great grandchildren which, he enjoyed for over 48 years.  He was an avid history buff, enjoying traveling to Georgia, Virginia and Washington DC. Robert was preceded in death by his wife, Erna, on November 15, 2008; parents Leonard and Clara; son Ted on October 24, 2017; siblings Orland (Eyvonne), Dean, Patricia (Wallace) Bode, and John (Marlys) Thorson; brother-in-law Walter (Kathleen) Schulz, sister-in-law Olidia (Fred) Karau and Elna (Marvin) Davidson and an infant granddaughter. Surviving Robert are his children, Gerold (Janice) of Eagle Bend, Ray (Vicki) of Dilworth, Julie (Charles) Hoyle of S. Daytona, FL, Diane of New Ulm; daughter-in-law Carol Thorson of Courtland; sister-in-law Betty Thorson; 11 grandchildren, 18 great-grandchildren, along with a multitude of nieces, nephews, and friends. Honorary pallbearers will be Robert’s granddaughters Resa Harris, Kelly Jensen, Stephanie Keech and Amanda Schoon. Pallbearers will be Robert’s grandsons Kurt Thorson, Brian Thorson, Richard Thorson, Michael Wenner, Stephen Wenner, Joseph Wenner and Joshua Crider. Burial will be in Immanuel Lutheran Cemetery, Eagle Bend, MN.

The funeral service for Robert Thorson will be held at 2:00 p.m. on Friday, February 8, at Immanuel Lutheran Church in Eagle Bend with Pastor Justin Hesterman presiding. Visitation will be held at the church on Thursday from 5:00 until 8:00... View Obituary & Service Information

The family of Robert Thorson created this Life Tributes page to make it easy to share your memories.

The funeral service for Robert Thorson will be held at 2:00 p.m....

Send flowers to the Thorson family.