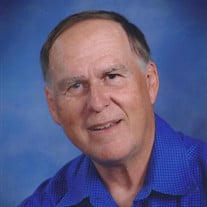 The memorial service celebrating the life of Rodney Broding, of Wadena and formerly of Battle Lake, will be held at 11:00 a.m. on Tuesday, November 9, at the Johnson-Schuller Chapel in Wadena, with Pastor Del Moen presiding. Visitation will be held on Monday, from 5:00 until 7:00 at the Johnson-Schuller Chapel, and will resume on Tuesday from 9:30 a.m. until the time of the service. *Because of the high percentage of Covid-19 in Wadena County, Marilyn recommends wearing a mask. For those unable to attend in person, a link will be available here November 9th at 10:45am to view Rod's service virtually. Rodney, age 81, passed away on October 24, 2021, at the Fair Oaks Lodge, in Wadena, MN. Rod Broding, age 81, of Wadena, grew up in Lake Benton, MN.  He spent much of his youth fishing, hunting birds and small game which gave him a lifelong appreciation of nature. Although his sister, Audrey, was 13 years older than Rod, they remained close throughout his life.  When Rod was 12-years-old his father, Charles “Swede” Broding, died. At age 15, his mother, Myrtle Andrea (Hugger) Broding, married Jim (James Winnie) Kilts and the family moved to Pipestone, where Rod graduated with the class of 1958.  Because he had a biological dad, a stepfather, and a much older brother-in-law with whom he was close to, Rod would often comment on how fortunate he was to have had three fathers when most only get one!   Rod was the first in his family to attend college. He received a Bachelor of Science degree in education from St. Cloud State University in 1962.   He was a high school English teacher and speech/debate coach for several years.  He earned a Master’s Degree in Public Address from Iowa State.  His first teaching jobs were at First Lutheran School in Northridge, California and First Lutheran School in Blue Island, Illinois.  He then taught at Augustana Academy in Canton, SD, Battle Lake (MN) High School, and taught human relations classes at Moorhead State. In 1976, the family moved to Racine, WI, where Rod held the position of director of education at Our Savior’s Lutheran Church.  He continued his education at Luther Northwestern Seminary and earned a Master of Divinity in 1982 while simultaneously teaching college courses at Bethel College in Arden Hills, MN. He served as a pastor at Bigfork Lutheran Church, Effie Friedheim Church, and Pine River Lutheran Church, all in Minnesota.   Besides being a teacher and a minister, Rod owned and operated Rod’s Music (specializing in old time music and polka records) and Broding Taxidermy.  He was a fishing guide, lifeguard, referee, election judge, dance instructor, artist, motivational speaker, test developer, editor, and published author. In addition to self-publishing his own book, Tacklebox of Hope, he was also the author of over 100 magazine articles, Sunday School curricula, religious pamphlets, and devotions.  He wrote monthly newspaper columns in the Lake Benton Valley Journal and the Battle Lake Review. He earned numerous photography, writing and speaking awards. In 1998, Rod ranked 68th in the world competing in Toastmasters International. Rod also earned the Red Cross Certificate of Merit for his life saving skills in the summer of 1963 where he saved a child from drowning. Rod married Marilyn Keehr in 1962 at Holy Cross Lutheran Church in St. Cloud, MN. Together they raised three children and several foster kids.  The longest Rod and Marilyn ever lived in one place was in Battle Lake, MN (1971-1976 and again in retirement 2000-2019).  A highlight of Rod and Marilyn’s life together was a three-month sabbatical to Harare, Zimbabwe, Africa in 1991 where Rod developed a religious curriculum that used only the Holy Bible as its resource. He and Marilyn were inspired by the people there who could be so materially poor yet remain so happy. His stay in Zimbabwe influenced his later writing, especially his appreciation for water. Rod was involved in many organizations throughout his life such as Boy Scouts, college debate, NEA (National Education Association), Polka Lovers Klub of America, square dancing groups, Art of the Lakes, Toastmasters, Bigfork Lions, DFL, Sons of Norway, writers groups, and church councils.  He was a leader in many service and social justice organizations. Rod instilled in his children and students the importance of working diligently and doing a job well.  He fought for the underdog which sometimes made him unpopular. He always remained strong in his convictions.  He could be charming or difficult depending on the issue. He was happiest on the dance floor or on the lake fishing with someone.  He was a hardworking family man who was especially proud of his grandchildren.  Hobbies included oil painting, cutting firewood, collecting phonograph records, fishing, hunting, dancing (ballroom, old time, folk, square), writing, and gardening.  In his 70s, he was diagnosed with and suffered from dementia. Sadly, dementia took away his ability to communicate well with others, although he remained hospitable and would still enjoy having a beer or wine with friends and family.  He lived his life believing we learn as much from our mistakes as our successes, maybe more. He remained a teacher at heart throughout his entire life. Rod was preceded in death by his parents; two brothers-in-law, Harvey Johannsen and James Keehr; one sister-in-law, Betty Muehlbauer .  He is survived by his devoted wife of 59 years, Marilyn; his three children, Dana (Jill) Broding of Rush Point, Loni (Don) Niles of Wadena, Blake (Patrice) Broding of Princeton; his six grandchildren, Jennifer Broding, Joseph (Elise) Broding, Eliah (Katie) Anderson, Daniel Anderson, Riley (Caitlyn) Broding, Lacee Broding; and three great-grandchildren. He is also survived by his loving sister, Audrey Johannsen, of Sioux Falls; sister-in-law, Renee Ginn of Northern Ireland; nieces, Vicki (Leon) Versaevel, Kim (Rod) Olson, and Robyn Behrens; grand nieces and nephews, and step-relatives. Memorials preferred to Lutheran World Relief or Salvation Army.

The memorial service celebrating the life of Rodney Broding, of Wadena and formerly of Battle Lake, will be held at 11:00 a.m. on Tuesday, November 9, at the Johnson-Schuller Chapel in Wadena, with Pastor Del Moen presiding. Visitation will... View Obituary & Service Information

The family of Rodney Broding created this Life Tributes page to make it easy to share your memories.

The memorial service celebrating the life of Rodney Broding,...

Send flowers to the Broding family.