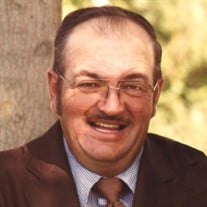 The graveside service for Roger Beach, of Clarissa, will be held at noon on Saturday, May 30, at the Pleasant Mound Cemetery near Clotho. Visitation will be held on Saturday at the United Methodist Church in Clotho from 10:00 a.m. until the time of the graveside service. Under the tender care of CTCCC staff, Lakewood Hospice, and surrounded by his children, Roger, age 82, was called home to join Ginny for a good game of cards on Wednesday, May 27, 2020. Roger Dean was born December 3, 1937 in Leslie Township, to George and Gladys (Hooseline) Beach. He attended country school until the 8th grade, and Eagle Bend Public School until the 10th grade. When he ended his school days he went to work for Johnny Sadlemyer hauling cattle and freight.  He then was employed by Starry Construction of Long Prairie for 18 summers.   Roger had many stories of “fun” in his younger days and working on the road.  In December of 1974, he met the love of his life, Virginia “Ginny” Pontius and they were married on March 21, 1975.   The newlyweds decided the farm was where they wanted to raise their family; and in September of 1976, they made the move to the home farm in Burleene Township.   It was there they raised their three children and created many fond memories.   Roger drove red tractors and Ford trucks.  He loved working the fields, bringing in the harvest, tending to his animals, and his many pets.  Roger enjoyed spending time with family and friends.    Some of Roger’s favorite pastimes included ice racing, snowmobiling, tractor pulls, four wheeling and relaxing with a cold beverage.  After retiring he enjoyed checking crops, reading the paper, watching traffic on Hwy 71 and making special memories with his grandchildren.   In early 2003, Roger and Ginny sold their dairy cows.  In 2004, the farm was sold to the third generation and they made their home in Clarissa.  Roger’s family made the difficult decision in 2015 to move him to Central Todd County Care Center where he resided until his death.   Preceding him in death: wife Virginia of 41 years (June 2016), parents George and Gladys Beach, in-laws Matt & Olga Pontius, brother Norman Beach, and several brother and sisters in-law.  Left to celebrate Roger’s legacy are his children: Nancy (David) Toensing of Farmington, Bonnie (Jeremiah) Johnson of Bertha, Daniel (Nicole) Beach of Eagle Bend. Grandchildren: Connor, Quinn, and Wesley Toensing, Madison and Boston Johnson, Kaeden, Delani, and Harper Beach.  Brothers: Myron, Dennis (Karen), Terry (Edna), Alan (Sheryl) Beach and their families.   Special lifetime friends Doug and Pam Sherman. In-laws, Janet Thorud, Helen Pontius, and Lonna Olson, along with many nieces and nephews. Pallbearers are David Toensing, Jeremiah Johnson, Bryan Olson, Dale Olson, Jeff Sarff, and Eric Denny.  Honorary Pallbearers are his grandchildren. Burial will be in held in Pleasant Mound Cemetery, Clotho, MN.

The graveside service for Roger Beach, of Clarissa, will be held at noon on Saturday, May 30, at the Pleasant Mound Cemetery near Clotho. Visitation will be held on Saturday at the United Methodist Church in Clotho from 10:00 a.m. until the... View Obituary & Service Information

The family of Roger Beach created this Life Tributes page to make it easy to share your memories.

The graveside service for Roger Beach, of Clarissa, will be held...

Send flowers to the Beach family.