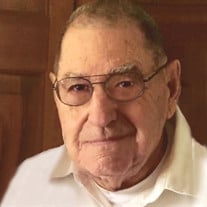 The Mass of Christian Burial for Romeo Goche, of rural Verndale will be celebrated at 11:00 a.m. on Monday, July 8, at St. Hubert’s Catholic Church in Bluegrass, with Father Lauren Germann as celebrant. Visitation will be held at the church on Monday from 9:30a.m until the time of the service with the Holy Name praying the rosary at 10:00a.m. Romeo, age 92, passed away on Monday, July 1, 2019, at the Fargo VA Health System in Fargo, ND. Romeo “Romie” Nickolas Goche was born to Martin Anthony and Ethel Elnora (Bookhart) Goche on November 3, 1926, in Verndale, Wadena County, MN. Romie went to country school and then graduated from Verndale High School. Romie honorably served our country in the US Navy during WWII and Korea. His most significant WWII assignment was in Subic Bay, P.I. After his honorable discharge from WWII, Romie returned home where he was reunited with his lifelong sweetheart, Betty, at a dance at the River Inn in Aldrich, MN. When Romie asked to take her home, they both instantly knew that night that they wanted to spend the rest of their lives together. They were united in marriage on September 23, 1946, in McMinnville, OR. He was called from inactive duty for 5 months in 1951 to serve in the Korean War. For 23 years, they lived in Oregon before returning to Minnesota to reside in rural Verndale. Other than Romie’s stint in the service, they were inseparable until Betty’s death on January 12, 2018. Over the years, Romie worked as a printer for a daily newspaper and also farmed. He relished being outdoors, riding his 4wheeler and then his side by side, caring for his land, hunting all kinds of game (sometimes shooting starlings out the dining room window scaring Betty and raising all kinds of dust), making lures and his favorite pastime was fishing. He amazed us with his ability to ‘witch’ for water. His knowledge of so many subjects was astounding. Whenever we had a question about anything, we wouldn’t need to ‘google it’ we would just ‘Romie it’ In his later years, he used his talents in landscape art and writing poetry. His Catholic faith was very important to him. He truly loved the Mass and receiving the Holy Eucharist. He was a godfather to many. Romie was preceded in death by his wife, Betty; parents, Martin and Ethel; son, Bruce; daughter, Joan ; brother, Richard; sister, Elnora Vining Romie will be dearly missed by his brother John (Claudia) Goche, sister Virginia (Jim) Chalmers, grandchildren, great-grandchildren, along with a host of many nieces, nephews, neighbors and friends. Active pallbearers will be Steve Goche, Bill Goche, Jerry Kern, Joe Kern, Matt Kern and Tom Giza. Burial will be in St. Frederick’s Catholic Cemetery, Verndale, MN.

The Mass of Christian Burial for Romeo Goche, of rural Verndale will be celebrated at 11:00 a.m. on Monday, July 8, at St. Hubert&#8217;s Catholic Church in Bluegrass, with Father Lauren Germann as celebrant. Visitation will be held at the... View Obituary & Service Information

The family of Romeo "Romie" Goche created this Life Tributes page to make it easy to share your memories.

The Mass of Christian Burial for Romeo Goche, of rural Verndale...

Send flowers to the Goche family.