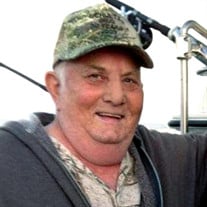 The graveside memorial service celebrating the life of Ronald Bastian of Bertha will be held at 1:00 p.m. on Saturday, May 21, at St. Joseph’s Catholic Cemetery, Bertha, MN. Following the graveside service family and friends are welcome to continue celebrating Ron's life at the Community Center. Ronald L. Bastian , 82, passed away on December 28, 2021, at St. William’s Living Care Center in Parkers Prairie, MN. Ronald was born to Owen and Cordella (Ludtke) of Sebeka, on November 19, 1939 at home. He attended school in Sebeka, Wadena, Two Harbors and Biwabik where he graduated in 1957. After graduation he joined the Coast Guard and was honorably discharged in1962. He married Kathleen (Wagner) in 1963 in Bertha, MN. Ron came to Bertha and worked for his uncle, Myrton Wegener at Wegener Implement. In 1965 he took over the business with his father, Owen, and Harold Goepferd. Eventually, he became the sole owner of Bertha Garage and Tractor Repair. After he sold the business in 2001, Ron worked seasonally at the potato company for a few years. Ron was an active member of his community serving on the school board and several terms as mayor as well as the fire department, Lions Club and Commercial Club. He also drove a school bus for many years. He enjoyed woodworking, reading, fishing, horseshoe, cards and in the later part of his life, the casino. Ron was preceded in death by his parents, Owen and Cordella. He is survived by his wife of 59 years, Kathy; as well as his children, Robert (Lynn) Bastian, Deborah Bastian, Lee Ann (Mike) Carney, William (Karen) Bastian and Naomi (Scott) Simon and nine grandchildren; sister, Charlotte Lage, and brother, Keith David (Janice) Bastian. Honorary urn bearers will be Ron's grandchildren: Tricia Bastian, Trevor Bastian, Katrina Carney, Mikaila Carney, Jacob Bastian, Lauren Bastian, Luke Bastian, Kayleigh Simon, and Rylie Simon.

The graveside memorial service celebrating the life of Ronald Bastian of Bertha will be held at 1:00 p.m. on Saturday, May 21, at St. Joseph&#8217;s Catholic Cemetery, Bertha, MN. Following the graveside service family and friends are welcome... View Obituary & Service Information

The family of Ronald Bastian created this Life Tributes page to make it easy to share your memories.

The graveside memorial service celebrating the life of Ronald...

Send flowers to the Bastian family.