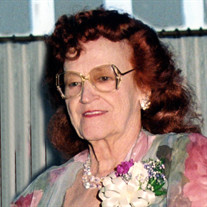 The memorial Mass for Rose Wegscheid of Wadena, will be celebrated at 11:00 a.m. on Friday, June 21, at the St. Hubert’s Catholic Church in Bluegrass, with Father Lauren Germann as celebrant. Visitation with the family will be held at the church on Friday from 9:30 a.m. until the time of the Mass. Just days after her 93rd birthday, Rose passed away on Sunday, June 16, 2019, at the Fair Oaks Lodge, Wadena, MN, with compassionate care provided by Knute Nelson Hospice and the Fair Oaks staff. Rosemond “Rose” was born to Edward and Mary (Klinnert) Doll on June 3, 1926, in Rush Lake Township, Otter Tail County, MN. She attended country school through the eighth grade and eventually became active with a nursing staff. Rose was united in marriage with Romanus “Romy” Matthias Wegscheid on February 27, 1946, at St. John the Baptist Catholic Church in Bluffton. They made their home in Arizona where they owned and operated a grocery and meat market for over 47 years. Rose was a member of the VFW Ladies Auxiliary. Rose was preceded in death husband, Romanus on June 5, 2016; parents, Edward and Mary; daughter. Tammy; siblings, Herbert, Adrian, Donald, Vernon, August, Pauline and Joan. Surviving Rose are her children Darrell (Teresa) Wegscheid of Sherwood, OR, Vernon (Trudy) Wegscheid of Henderson, NV, and Mary Walters (Mark Kotas) of Tonto Basin, AZ; along with siblings, Thomas, Wilfred and Marie. Honorary urnbearers will be Rick Price, Ervin Price, Willy Doll, Levi Doll, Joe Weller and Paul Malone. Burial will be at a later date in St. John the Baptist Catholic Cemetery, Bluffton, MN.

The memorial Mass for Rose Wegscheid of Wadena, will be celebrated at 11:00 a.m. on Friday, June 21, at the St. Hubert&#8217;s Catholic Church in Bluegrass, with Father Lauren Germann as celebrant. Visitation with the family will be held at... View Obituary & Service Information

The family of Rose Wegscheid created this Life Tributes page to make it easy to share your memories.

The memorial Mass for Rose Wegscheid of Wadena, will be celebrated...

Send flowers to the Wegscheid family.