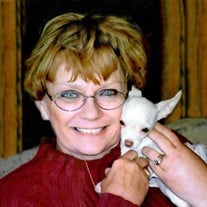 The Memorial Mass for Rosemary Schwantz of Bertha, and formerly of Clear Lake, will be celebrated at 2:00 p.m. on Wednesday, September 1, at St. Joseph’s Catholic Church in Bertha, with Father Aaron Kuhn as celebrant. Visitation will be held at the church on Wednesday, from Noon until the time of the Mass. Rosemary, age 70, passed away on August 27, 2021, at Greenwood Connections Nursing Home in Menahga, MN. Rosemary "Rose" Jean Schwantz entered this world on March 6th, 1951, as the youngest of five children to Roy and Martha Retzlaff. Rose was raised in a creative home where she got her talents for cooking, crafts, painting, her good sense of humor and quick wit. On July 1st, 1972, Rose married Jerome (Jerry departed 03/22/2021) her biggest supporter. Together they wanted nothing more than to be good parents to their children: Kelly, Stacy, Christopher, and Lindsey (once again, ordered chronologically, not by best hunting skills). Rose and Jerry were loving grandparents to Connor, Laila, Jack, Jerome, and Victoria. Rose was an avid reader, loved all animals and enjoyed cooking. She fought several personal battles, but she loved her family, her friends and her cats. She was clever, kind, and had a big heart. In return, Rose’s family was devoted to her as well as her children’s spouses, especially Kali (Chris) and Scott (Lindsey), who did several errands, took her to appointments and did many chores when Rose was unable to. In her final days, without her rock Jerry, Rose was kept comfortable with assistance from the nursing staff at Green Pine Acres. We trust Rose is in heaven with Jerry, and that she has been transformed back into the woman that he fell in love with. Due to the recent passing of Jerry, our homes and hearts are already full of beautiful potted plants. A written memory of Rose and/or Jerry would be much appreciated. We look forward to reading them.

The Memorial Mass for Rosemary Schwantz of Bertha, and formerly of Clear Lake, will be celebrated at 2:00 p.m. on Wednesday, September 1, at St. Joseph&#8217;s Catholic Church in Bertha, with Father Aaron Kuhn as celebrant. Visitation will... View Obituary & Service Information

The family of Rosemary Schwantz created this Life Tributes page to make it easy to share your memories.

The Memorial Mass for Rosemary Schwantz of Bertha, and formerly...

Send flowers to the Schwantz family.