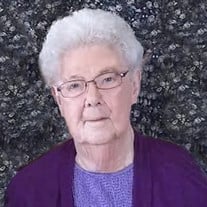 The funeral service for Rubye Uhren of formerly of Vining, will be held at 11:00 a.m. on Thursday, June 27 at the Vining Lutheran Church in Vining. A visitation will be held at the church on Wednesday evening from 5:00-7:00 p.m. with a prayer service at 7 p.m. Visitation will be held at the church on Thursday one hour prior to the service. With family at her side, Rubye, age 96, passed away on Sunday, June 23, 2019 at the Good Samaritan Care Center, in Battle Lake, MN. She was under the hospice care of LB Homes. Rubye Sylvia Uhren was born to Iver and Oline (Holm) Halvorson on July 19, 1922 at the family farm near Vining, MN. She was baptized and confirmed at the Vining Lutheran Church. She attended both Folden and Vining Elementary Schools and graduated from Henning High School in 1941. After High School she worked at the Ken Anderson Insurance agency in Henning and at the Battle Lake Hatchery. She married Howard Uhren on May 16th 1946. Together they farmed and raised their six children on a farm south of Vining. After Howard’s passing in 1978 she remained on the family farm until the fall of 1986 when she then moved into an apartment at the home of one of her children. She resided there until April when she needed nursing home care. Her new and forever residence is with her Heavenly Father. Rubye will be remembered for many things but mostly for her capacity to love and see the best in everyone. She poured her life into her family and into the lives of others; especially where that love was needed the most. She served many years as a 4-H leader and served faithfully in many capacities in her church. She especially loved the time she spent with the other quilting ladies and loved to think about a child on the other side of the world finding warmth in one of the hundreds of quilts they made. Rubye was preceded in death by her husband Howard, her parents Iver and Oline, siblings, Art, Bert, Olga, Walt, Sam, and Rudolph, several sister and brothers in-law, daughter in-law Vivian Uhren, grandson in-law Eric Seibold, great-grandson Miqueas, niece Cheryl Gordon, nephew Timothy Moen, several cousins and other grand nieces and nephews. Rubye is survived by her children, Sylvia (Owen) Lokken of Dallas, TX; Cynthia Uhren of Battle Lake, MN; Carolyn (Carl) Egstad of Fergus Falls, MN; Ken (Joan) Uhren of Vining, MN, Mary Uhren of Wahpeton, ND, and David (Susan) Uhren of Vining, God-daughter Tonya, 17 grandchildren, 24 great-grandchildren, 2 great-great grandchildren, and many nieces and nephews and cousins. Honorary pallbearers will be Curt Halvorson, John Halvorson, Paul Halvorson, Steve Johnson and Jim Mathieson. Active pallbearers will be Karsten Lokken, Erik Lokken, Nick Bredeson, Peter Egstad, Ben Uhren, Michael Uhren, Keeler Johnson, Spencer Johnson Mike Fielding, Ben Nebelsick, Aaron Juliot, Tyler Johnson, and Jamie Boehmer Burial will be in the Vining Lutheran Church Cemetery, Vining, MN.

The funeral service for Rubye Uhren of formerly of Vining, will be held at 11:00 a.m. on Thursday, June 27 at the Vining Lutheran Church in Vining. A visitation will be held at the church on Wednesday evening from 5:00-7:00 p.m. with a prayer... View Obituary & Service Information

The family of Rubye Uhren created this Life Tributes page to make it easy to share your memories.

The funeral service for Rubye Uhren of formerly of Vining, will...

Send flowers to the Uhren family.