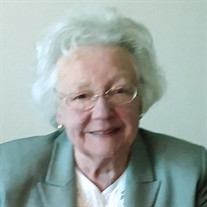 The funeral service for Ruth Gronlund will be held at 11:00 a.m. on Thursday, July 22, at St. John Lutheran Church in Wadena, with Pastor Stephen Meltzer presiding. Schuller Family Funeral Homes & Cremation Services is inviting you to a scheduled Zoom event. Visitation will be held on Wednesday, from 4:00 until 7:00 p.m., at the Johnson-Schuller Chapel in Wadena. Visitation will resume at the church on Thursday from 9:30 a.m. until the time of the service. Ruth, age 87, passed away on July 17, 2021, at The Meadows of Wadena Senior Living, in Wadena, MN, under the compassionate care of Knute Nelson Hospice. Ruth was born to Heinrich “Henry” and Helene (Panknin) Berg on April 24, 1934, in Schernow, Germany, near the Oder River. This area was given to Poland after WWII and they had to leave. A rural home was found west of Berlin with a relative; however, it was in the Soviet zone and no one was allowed to leave. A clever trade was made with a woman who wished to live in the country with her children, so Ruth’s parents moved the family into Berlin until their immigration number came up; and at the age of 17, Ruth’s family had the opportunity to move to America: Park Rapids, MN. Not knowing much English, school was quite difficult for Ruth and her sister, Elfriede. The support of the staff, students and community was always a fond remembrance for Ruth. Ruth was united in marriage with Walter Raymond Gronlund on June 4, 1954, at the First Baptist Church in Park Rapids. They made their home and reared their family in Verndale, where Ruth was well known for baking beautiful wedding cakes. Ruth was a talented pianist and organist. She served as church organist at Redeemer Lutheran Church in Verndale and Immanuel Lutheran Church in Bartlett Township. She also taught piano lessons for many students. In addition, she did the bookkeeping for Walt’s G & L Service station, which he purchased in 1952. Ruth enjoyed knitting, crocheting, and cooking, along with participating in a homemaker’s group and her church circle. Her greatest joy was spending time with family and friends. Preceding Ruth in death were her husband, Walter, on March 8, 2010; parents, Henry and Helene; and in-laws, William and Hilda Gronlund. Ruth is survived by her daughter, Nancy Helen Gronlund, of Grayslake, IL; son, David Walter (Mary) Gronlund, of Verndale; grandsons, Corey David Gronlund and Ryan Walter Gronlund; sister, Elfriede (Harry) Rebiger; along with many brothers- and sisters-in-law, nieces, nephews, and friends. Burial will be in Green Lawn Cemetery, Verndale, MN.

The funeral service for Ruth Gronlund will be held at 11:00 a.m. on Thursday, July 22, at St. John Lutheran Church in Wadena, with Pastor Stephen Meltzer presiding. Schuller Family Funeral Homes & Cremation Services is inviting you to a scheduled... View Obituary & Service Information

The family of Ruth Gronlund created this Life Tributes page to make it easy to share your memories.

Send flowers to the Gronlund family.