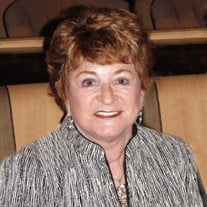 A memorial service celebrating the life of Sally Lehr of Ottertail, MN, and Desert Horizons, CA, and formerly of Wadena, will be held at a later date at the First Congregational United Church of Christ in Wadena. Sally Ann Davis Lehr, AKA Mustang Sally, rides on. Sally passed away peacefully in Ottertail June 16, 2020 in the presence of family at the age of 82. Sally was born March 11, 1938 to Russell and Lucille Davis in Hunter, ND. She is survived by her sister Linda, sons JD (Connie),Tom (Nancy), and Steve (Natalie). She is preceded in death by her husband Jim and brother Gary Davis. Sally moved to Wadena in 1947 where she attended high school and graduated in 1956. Her father Russell founded Russ Davis Wholesale in 1955 driving back and forth from the Minneapolis fruit terminal in his car back to central Minnesota. Eventually he would purchase the first truck for the operation with proceeds from a settlement for Sally's benefit. Sally's husband Jim and her brother Gary grew the company over the years and would later sell the company to its employees. Sally attended NDSU after high school and married Jim on March 29, 1958. Sally then began a lifelong career of motherhood and grand motherhood to her grandchildren Alison McIntyre, Mitchell Lehr, Taylor Lehr, Avery Lehr and Will Lehr. She also was a great grand mother to Jimmy McIntyre and more recently to Margaret McIntyre. Sally was involved in many community organizations including PEO, Meals on Wheels, Madhatters and the Congregational Church. Sally was an inventor of a skate guard, den mother, cheerleader and bus driver to many extracurricular activities of her children. She loved the lake life and boating to Zorbas with her grandchildren. Sally was a competitor who loved playing cards and games. Sally will be best known and missed by the communities in which she lived including NDSU, Wadena, Ottertail and Desert Horizons. Sally was very social and valued her friends immensely. Her nickname, Mustang Sally, is indicative of her social life as the dance floors would part for her and her husband Jim whenever the song Mustang Sally was played. Due to COVID-19 the Congregational Church remains closed. A memorial will be planned as conditions improve to have a safe gathering of family and friends.

A memorial service celebrating the life of Sally Lehr of Ottertail, MN, and Desert Horizons, CA, and formerly of Wadena, will be held at a later date at the First Congregational United Church of Christ in Wadena. Sally Ann Davis Lehr, AKA... View Obituary & Service Information

The family of Sally Lehr created this Life Tributes page to make it easy to share your memories.

A memorial service celebrating the life of Sally Lehr of Ottertail,...

Send flowers to the Lehr family.