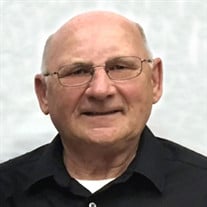 The funeral service for Sam Goddard, of Wadena, will be held at 11:00 a.m. on Saturday, October 5, at the Wadena Alliance Church in Wadena, with Pastor Vaughn White presiding. Visitation will be held on Friday, October 4, from 5:30 until 7:00 p.m.at the Johnson Schuller-Chapel in Wadena, and will resume at the church on Saturday from 9:30 a.m. until the time of the service. Sam, age 75, unexpectedly passed away of natural causes on Wednesday, October 2, 2019, at his home in Wadena, MN.   Sam Roger Goddard was born to Harold William and Jennie Elizabeth (Wassink) Goddard on February 14, 1944, at home in Aldrich, MN. He graduated from Verndale High School and then worked for three years at the Verndale Creamery. Sam served in Vietnam with the US Army from May 1966 to December 1968. After his honorable discharge he started working in the oil fields of Alaska. He came back to Wadena, MN, and worked 37 years at the Lampert Lumber yard, later named Timber Roots. Sam also worked as a part-time custodian at the Wadena High School for three years to close out his employment and then opened the doors to full retirement.   Sam was united in marriage with Norma Gwynn (Norton) Goddard on January 22, 1972, at the Church of Christ in Wadena. Sam like visiting, gardening, working jigsaw puzzles, and Bible readings. He loved time with his family at gatherings and watching his grandkids' sports. He belonged to the American Legion, VFW, and was the President of the Wadena Cemetery Board, and a Red Cross blood donor for many years.   Sam was preceded in death by his parents Harold and Jennie; and siblings Evelyn, Jean, Doug, Donald, Clinton and Francis.   Surviving Sam are his wife of 47 years, Norma of Wadena; children Glen (Deann) Goddard, Charles (Michelle) Goddard and Brenda (Don) Weniger all of Verndale, and Lorrie (Lance) Rach of Perham; 12 grandchildren and four great-grandchildren; siblings Pat (Allen) Cottrell of Moorhead, Lou Harne of Wadena, Jim Goddard of Anderson, MO and Paulette Plautz of Sartell; along with a host of friends and neighbors.   Honorary pallbearers will be Sam’s grandchildren Ashley, Jeremy, Kristin, Seira, Chandler, Sydney, Luke, Skylar, Leighton, Jackson, Reagan and Braylon.   Serving as pallbearers will be Terry Goddard, Kevin Goddard, Curt Goddard, Dale Norton, Mike Harne, and Mark Cottrell.   Military honors provided by the Elmer Goche Post 3922, Veterans of Foreign Wars, Wadena, MN.   Burial will be in Green Lawn Cemetery, Verndale, MN.   Memorials may be directed to the Verndale Green Lawn Cemetery, Wadena Veterans Memorial Park, or Honor Flight.

The funeral service for Sam Goddard, of Wadena, will be held at 11:00 a.m. on Saturday, October 5, at the Wadena Alliance Church in Wadena, with Pastor Vaughn White presiding. Visitation will be held on Friday, October 4, from 5:30 until 7:00... View Obituary & Service Information

The family of Sam Goddard created this Life Tributes page to make it easy to share your memories.

The funeral service for Sam Goddard, of Wadena, will be held...

Send flowers to the Goddard family.