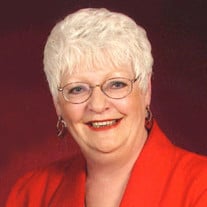 The memorial service celebrating the life of Sandy Ashbaugh of Bertha, will be held at 11:00 a.m. on Tuesday, May 18 , at the New Life Church of God with Pastor Jason Knoll presiding. A gathering of family and friends will held at the Schuller Family Funeral Homes & Cremation Services’ Domian-Anderson Chapel in Bertha on Monday from 5:00 until 7:00 p.m. and will resume at the church on Tuesday from 9:30 a.m. until the time of the service. Sandy, age 74, passed away with family at her side on May 12, 2021, at her home in Bertha, MN, and under the compassionate care of Lakewood Health System Hospice, Staples, MN. Sandra Kaye Stave was born to Russell and Delores (Lundstrom) Stave on March 29, 1947, in Bertha, MN. Sandy was united in marriage with Kenneth Marlyn Ashbaugh on February 19, 1965, in Sisseton, SD. They made their home in Bertha where they raised their family. After the children were grown, Sandy did sewing at the Ringer Plant in Staples and at Homcrest, Ind. in Wadena. Community members will remember her friendly manner at Schultz Drug in Bertha. In their early years together, Sandy and Ken loved to make their way around the dance floor! Music soothed her soul as she sang and danced about the house, meticulously cleaning every corner. Home decorating was one of her passions, and furniture was moved about frequently, even to the last, when her hospice bed was transitioned three times to capture the best advantages of being with her family. Sandy’s interests also included camping with her family. They began in a tent, and moved up to a pop-up camper, then a motorhome, and finally traveled in luxury in a 5th-wheel. Life was good! Sandy showered her entire family with sweet treats, loving every moment with each of them. Preceding Sandy in death were her parents, Russell and Delores; brother Richard; infant sister, Shelbey, and sister Deanna Lietz. Sandy will always be loved by her husband Ken of Bertha; children Kimberly (Ron) Ashbaugh Clasen of Princeton and Shawn (Melissa) Ashbaugh of Eagle Bend; six grandchildren and seven great-grandchildren; siblings Gail (Larry) Pearson, Randy (Caryl) Stave and Doug (Gina) Stave; along with a host of friends and neighbors. Serving as urn bearer will be Shawn with all of Sandy’s grandchildren as honorary urn bearers. A private burial will be in Zion Cemetery, Bertha, MN.

The memorial service celebrating the life of Sandy Ashbaugh of Bertha, will be held at 11:00 a.m. on Tuesday, May 18 , at the New Life Church of God with Pastor Jason Knoll presiding. A gathering of family and friends will held at the Schuller... View Obituary & Service Information

The family of Sandra "Sandy" Ashbaugh created this Life Tributes page to make it easy to share your memories.

The memorial service celebrating the life of Sandy Ashbaugh of...

Send flowers to the Ashbaugh family.