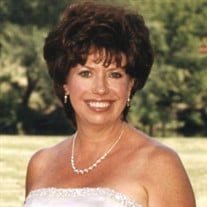 The funeral Mass of Christian Burial for Sandy Winkels, of Wadena, will be celebrated at 11:00 a.m. on Friday, June 21, at St. Ann’s Catholic Church with Father Aaron Kuhn as celebrant. A visitation will be held Thursday evening from 5:00-8:00 p.m. with parish prayers at 6:00 p.m. at St. Ann’s Parish Hall. Visitation will continue Friday at the church from 9:30 a.m. until the time of mass. Sandra Kay Winkels, age 73 from Wadena, MN passed away on Fri. June 14, 2019, at the St. Cloud Hospital. She was surrounded by her loving family. Sandy was born on Oct. 26, 1945 in Bertha, MN to John and Bertha (Oldenburg) Sundby. She was married to James Henry Winkels on Sept 4, 1965 in Verndale, MN. Sandy started out going to country school and then attended public school in Wadena where she graduated in 1963. She went to the Wadena Tech School for Cosmetology and worked in several smaller shops until she opened Sandy’s Country Styles outside of Wadena. In the late 80s, she taught Cosmetology at Scot Lewis in St. Paul, she later worked at Laurie’s In Watertown, MN, and at the age of 65 opened Salon on Second in Perham, MN where she worked until 2014. Growing up with six brothers wasn’t always easy but Sandy kept up with them and shared their love of horses which was such a big part of their lives. She adored spending time with her husband, children, and grandchildren, as well as her many close friends. Sandy had a very giving, generous heart and was a stranger to no one. Her smile was infectious and she always had a positive, encouraging word to share. She didn’t preach to others, instead she lead by example – spreading God’s love everywhere she went. She is survived by her husband Jim Winkels, Wadena, MN, her children Brenda (Mike) Kramer, Sebeka, MN, Lisa (Greg) Beuning, New Market, MN, James Jr., Waconia, MN, and Tammy (Mike) Kircher, Wadena, MN, eleven grandchildren and one great-grandchild, brothers Cleon (Pat) Sundby, Brainerd, MN, John Jr. (Betty) Sundby, Brainerd, MN, Jim (Barb) Sundby, Wadena, MN, Ron (Judy) Sundby, Verndale, MN, Gary Sundby, Two Harbors, MN, and Jerry (Cindy) Sundby, Watertown, MN. She was preceded in death by her father, John Sundby and mother, Bertha (Oldenburg) Sundby. Active pallbearers will be her grandsons, Matthew Kramer, Kyle Beuning, Logan Beuning, Justin Beuning, and nephews, Jason Sundby and Ryan Sundby. Burial will be in St. Henry’s Cemetery, Perham, MN.

The funeral Mass of Christian Burial for Sandy Winkels, of Wadena, will be celebrated at 11:00 a.m. on Friday, June 21, at St. Ann&#8217;s Catholic Church with Father Aaron Kuhn as celebrant. A visitation will be held Thursday evening from 5:00-8:00... View Obituary & Service Information

The family of Sandy Winkels created this Life Tributes page to make it easy to share your memories.

The funeral Mass of Christian Burial for Sandy Winkels, of Wadena,...

Send flowers to the Winkels family.