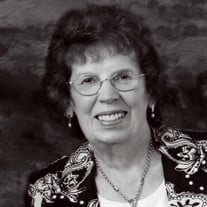 The memorial service celebrating the life of Shirley Montan, of Wadena, will be held at 11:00 a.m. on Friday, September 17, 2021 at the Immanuel Lutheran Church in Wadena, with Pastor Nate Loer officiating. Friends and family may gather at the church on Friday from 9:30 a.m. until the time of the service. Shirley passed away on Wednesday, December 16, 2020, at the Fair Oaks Lodge in Wadena, MN.  Shirley was born on March 18, 1925, in Roseau, MN, to Carl and Agnes (Moe) Dahlquist, who shaped her life. From her father she shared a love for ice skating, choral singing and accounting. From her mother, her love of bridge, cooking, flowers and interior decorating. Shirley graduated from Roseau High School in 1943. She was one of the first hockey cheerleaders and was active in girl’s sports. She attended St. Olaf College for two years, where she met Paul Montan, a WWII veteran. He claimed he knew in two days she would become his wife. In 1947, they were married in Roseau, with Paul’s father officiating on June 28th, a wedding date shared with Shirley’s parents, Carl and Agnes Dahlquist, along with her sister and brother-in-law, Judy and Darrel Borgen. In 1953, Shirley, Paul and their daughter, Nancy, moved to Wadena where Paul had accepted a teaching position. Over the years, Shirley worked as a secretary, JC Penney Christmas employee, Kordel Furniture interior decorator, and Wadena County financial worker. With 67 years in one town, Shirley enjoyed three bridge clubs, Ladies Day golfing, raising beautiful flowers, and volunteering at Immanuel Lutheran Church. In retirement, Shirley and Paul enjoyed 22 years of spending winter months in the south, mainly in Venture Out, AZ. At the age of 85, they decided to get a dog to keep them young, but ended up with two puppies, Mindy and Misty. Getting old isn’t easy! Preceding Shirley in death were her husband, Paul, on March 20, 2018; parents, Carl and Agnes; son, Steven Carl Montan; brother, Raymond (June) Dahlquist; and in-laws, Nels and Alice Montan. She is survived by her daughter, Nancy (Jim) King of Minneapolis, and son, Tim Montan of Wadena; sisters Nancy (Tom) Harris, Judy (Darrel) Borgen and Mary (Harry) Peyerl; along with neighbors, friends and coworkers. Burial will be held at 11:00 a.m. on Monday, September 20, 2021, in Hope Cemetery, Roseau, MN.

The memorial service celebrating the life of Shirley Montan, of Wadena, will be held at 11:00 a.m. on Friday, September 17, 2021 at the Immanuel Lutheran Church in Wadena, with Pastor Nate Loer officiating. Friends and family may gather at... View Obituary & Service Information

The family of Shirley Montan created this Life Tributes page to make it easy to share your memories.

The memorial service celebrating the life of Shirley Montan,...

Send flowers to the Montan family.