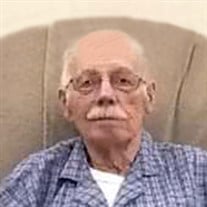 The Memorial Mass for Stanley Brastad, formerly of Staples, will be celebrated at 11:00 a.m. on Saturday, July 15, at the St. Hubert’s Catholic Church in Blue Grass with Father Lauren Germann as celebrant. Visitation will be held at the church on Saturday from 9:30 a.m. until the time of Mass. Stanley, 94, passed away on July 3, 2017, at the Lakewood System Care Center in Staples, MN. Stanley was born to Einar and Ann (Gilbertson) Brastad on February 13, 1923 in Browerville, MN. He completed high school and entered the US Army in 1942, where he served during WWII. He received honorable recognition earning six bronze stars and was discharged in 1945. Stan married Lucille Kasper on April 19, 1947. They moved to the Twin Cities where he was employed in the plumbing industry. After retiring they moved and lived in Staples area for 22 years. Stanley found fulfillment in working and caring for his family. A special focus was helping his kids and grandkids achieve their life goals. Stanley was preceded in death by his wife Lucille on August 3, 2010; parents Einar and Ann; and daughters Patricia Keegan and Karin Frenz. He is survived by sons Larry (Diane) Brastad of Buffalo and Einar Brastad of Staples; daughter Phyllis (Mike) Willis of Plymouth; along with 10 grandchildren, 21 great-grandchildren and 1 great-great-grandchild. Honorary pallbearers will be Oran Willis, Jason Brastad, Brian Brastad, Adam Frenz, Michael Lother, Mark Lother, Jeff Dagen and Dan Batten. Burial will be held at St. Hubert’s Catholic Cemetery, Blue Grass, MN.

The Memorial Mass for Stanley Brastad, formerly of Staples, will be celebrated at 11:00 a.m. on Saturday, July 15, at the St. Hubert&#8217;s Catholic Church in Blue Grass with Father Lauren Germann as celebrant. Visitation will be held at the... View Obituary & Service Information

The family of Stanley Brastad created this Life Tributes page to make it easy to share your memories.

The Memorial Mass for Stanley Brastad, formerly of Staples, will...

Send flowers to the Brastad family.