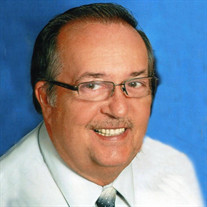 A private funeral service will be held for Terry Boyd, of Verndale, at the Verndale Alliance Church in Verndale with Pastor Daryl Jacobson presiding. The public visitation with family and friends will be held on Sunday, November 15, from 4:00 until 7:00 p.m. at the Verndale Alliance Church. Surrounded by his family, Terry passed into the arms of Jesus on November 10, 2020, at the St. Cloud Hospital. Terry Dempster Boyd was born to Harry and Cynthia (Barber) Boyd on July 24, 1947 in Breckenridge, MN. His childhood was spent growing up in Pine River where he graduated from high school. He then went into the US Airforce where he served 4 years, with two of them at the Radar Station outside Wadena. He married Charlotte “Char” Heather of Wadena, on December 21, 1968. They both enjoyed spending their time in church singing in the choir, being listeners and meal servers for Awana, bible studies with friends, and 4-H leaders while their kids were younger. Terry enjoyed his free time hunting, fishing, doing woodworking projects, and traveling. His time camping, and traveling with family and friends was always a fond memory. Terry worked for Russ Davis Wholesale as an office manager for 35 years. He retired in 2006. In retirement, he could most often be found at Boondock’s café enjoying a cup of coffee with the boys. Terry also liked to spend some of his time as treasurer on the board of the CMA church, and Smile Again Ministries. He was proud of the 43 years he served as treasurer of the Wing River Township. You may have seen Terry at the elections as he was an election judge for many years as well. Preceding Terry in death were his wife Char, on February 7, 2017; parents Harry and Cynthia; brother Raymond; step-sister Audre Johnson; granddaughter Elianna Bergquist; and Baby Arroyo. Lovingly remembering Terry will be his children Angela (Jeff) Bergquist of Bloomington, Heather (Mario) Arroyro of Wadena, and Phillip Boyd of Maplewood; 4 grandchildren; sister Barbara Thom of Blythe, CA; along with numerous friends. Honorary pallbearers will be grandchildren Max Reichert Boyd, Mia Arroyo, Isobella Bergquist and Angelica Arroyo. Active pallbearers will be Michael Johnson, Chris Bounds, Jerald Thom, Chad Endres, Scott Endres, Andy Endres, Dan Rebelein and Mark Gloege.

A private funeral service will be held for Terry Boyd, of Verndale, at the Verndale Alliance Church in Verndale with Pastor Daryl Jacobson presiding. The public visitation with family and friends will be held on Sunday, November 15, from 4:00... View Obituary & Service Information

The family of Terry Boyd created this Life Tributes page to make it easy to share your memories.

A private funeral service will be held for Terry Boyd, of Verndale,...

Send flowers to the Boyd family.