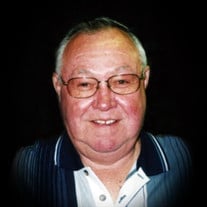 The funeral service for Theodore “Ted” Greenwaldt of Miltona, will be held at 11:00 am. on Tuesday, April 19, at the Immanuel Lutheran Church in Parkers Prairie, MN, with Pastor Kirk Lee presiding. Visitation will be held at the church on Monday from 5:00 until 7:00 p.m. and will resume at the church on Tuesday from 9:30 a.m. until the time of the service. Ted, age 90, passed away on April 10, 2022, at the hospital in St. Cloud, MN. Theodore Wallace Greenwaldt was born at home to Harry and Ella (Schaefer) Greenwaldt on June 24, 1931, in Bartlett Township, Todd County, MN. As a child he grew up with seven brothers and two sisters. At an early age Ted drove his Model T to sell magazines, and later drove truck in Montana. Ted served on the front lines in the US Army during the Korean Conflict from 1952 until his honorable discharge as a Sergeant in 1953 at Camp Carlson, CO. Ted was united in marriage with Betty Jean Schimmel on August 27, 1955, in Bertha. They made their home and raised their family in New Hope, while Ted worked as a warehouse manager for the Robbinsdale School District 281. In hours away from work, Ted liked to deer hunt, fish, and bowl. At home he played penny ante poker with the neighbors, and he found trips with family and friends to Lake Osakis, Brainerd area lakes and Moose Lake enjoyable get-aways. Following their full retirement in 1989, “Bed and Teddy” purchased land and built a home near lake Miltona, where he continued to live until moving into the town of Miltona just a few years before his passing. Ted had been a member of the Crystal VFW, and the Lions Club. Preceding Ted in death were his wife, Betty (1995); parents, Harry and Ella; and siblings, Ervin, Harold, Dennis, Glenn, and Lyle “Scotty” Greenwaldt. Remembering Ted will be his children, Debra (David) Wiese of Wadena, Douglas Greenwaldt of Champlin and Dawn (Jerry) Rako of Maple Grove; four grandchildren and five great-grandchildren; siblings, Gene, Larry, Verda (Denny) Dreger and Betty Buhle; along with numerous friends and neighbors. Honorary pallbearers will be Sarah Ohrmundt, Michael Greenwaldt and Jerry Anderson. Active pallbearers will be Paul Wiese, Jeremy Greenwaldt, Alyn Greenwaldt, Bruce Greenwaldt, Jim Greenwaldt and Steven Schirmers. Burial will be in St. Paul’s Lutheran Cemetery, Bertha, MN.

The funeral service for Theodore &#8220;Ted&#8221; Greenwaldt of Miltona, will be held at 11:00 am. on Tuesday, April 19, at the Immanuel Lutheran Church in Parkers Prairie, MN, with Pastor Kirk Lee presiding. Visitation will be held at the... View Obituary & Service Information

The family of Theodore Greenwaldt created this Life Tributes page to make it easy to share your memories.

The funeral service for Theodore “Ted” Greenwaldt of Miltona,...

Send flowers to the Greenwaldt family.