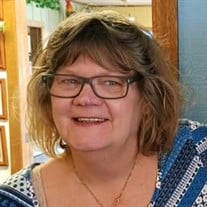 The celebration of life memorial open house for Theresa Owens of Ottertail, will be held on Sunday July 12, from 4:00 until 7:00 p.m. at the Ottertail Community Center in Ottertail. A Time of Remembrance will begin at 5:00 with classmate Cynthia Wallace sharing the eulogy of Theresa’s life. Theresa Owens, age 59, of Ottertail passed away on Saturday, July 4 at the St. Cloud Hospital. Theresa was born on October 25, 1960 in Chicago, Illinois to Edward and Novena (Davidson) Owens. She was raised for most of her life by her grandmother Gladys Davidson. Grandma was a fierce protector of Theresa, and they had a special relationship. Theresa moved to Henning in the middle of 5th grade and quickly declared Henning to be her town. When that tall “city” girl with the long grey maxi-coat walked down the Henning elementary hallway for the first time, everyone knew she was something special. Theresa declared herself the QUEEN in high school, and that name stuck with her throughout her life. Always the dramatic one, she was a talented actress in plays and excelled on the speech team with her humorous speeches. She was in Mr. Johnson’s choir and carried the Henning banner for the marching band. In addition, Theresa was a 4-H member and performed with her friend Jolene at the Share the Fun contest at the Minnesota State Fair. She attended and graduated from Fergus Falls Community College where she was a football and basketball cheerleader. Go Spartans! Theresa was a member of the Ottertail Lions Club for many years. She attended First Lutheran Church of Battle Lake where she was baptized and confirmed as an adult. Tess also volunteered as a speech coach and judge for the Battle Lake speech team. Theresa was a wonderful waitress before she became disabled. She worked at Stub’s and the Shoreline restaurants in Battle Lake, and Betty’s Pantry in Ottertail. She used to say, “I’m your waitress. If your food is good, my name is Theresa. If it is bad, my name is Brenda.” She also worked for several years at the Battle Lake Dairy Queen and was a talented ice cream cake decorator. Her most recent part time job was at the Ottertail Bakery. Theresa could amaze you with her speed of answering Jeopardy questions, and she had an obsession with TV crime stories. (ID TV was on pretty much twenty-four hours a day.) She enjoyed going to the casino with her friend Gail and was an expert at playing slot machines while smoking cheap North Dakota cigarettes. Theresa claimed that Buck Owens was her long-lost uncle, and we all know of her adoration for David Cassidy. She also loved Prince and is probably riding around in his little red corvette chasing David Cassidy around heaven’s streets while loudly singing “I think I love you!” Over the years, Theresa had several beloved dogs. Everyone remembers Sugar Marie Davidson, her Chihuahua while she was growing up. Most recently she had Cash Owens who she referred to as “Little Dog.” (“Little Dog” loved Theresa but really wasn’t a nice dog to the rest of us.) But her favorite dog was certainly EJ (Chipper Dog.) She even hosted an annual birthday party for her overweight, spoiled chocolate lab. Theresa was preceded in death by her grandparents Gladys and Albin Davidson, birth parents Novena Wheeler and Edward Owens, longtime friend Kim Broadland, her Godparents Rudy Haukebo and Kay Harms and other relatives and friends. She is survived by half siblings Denice Wheeler (Roy) and Carl Wheeler both of Lake Station, Indiana, Uncle Charles Davidson and his wife Fran of Isanti, Aunt Ardelle Birdsal of Robbinsdale, Aunt Marie Nelson of Henning, Aunt Esther Davidson of Menahga and several cousins. Theresa also had three Godchildren whom she adored and bragged about constantly. She would joke about her friends being so irresponsible by choosing her as the Godmother of their children, but she loved them like they were her own. Her Godchildren were Garrett Biederman of Fergus Falls, Cally Johannes Kempenich (Alex) of Wadena and Lacie Barnes of Perham. Theresa considered the entire Henning Class of 1978 to be her special family. She kept in contact with many of them over the years and could remember all sorts of fun facts from her school days. She also was loved by many other friends in the surrounding lakes area. Although it is impossible to list all of her special friends, some of the ones closest to her in the last years included Jolene Johannes, Deb Biederman, Deb Gaustad, Gail Pearson, Lance Christianson, Julie Johnson, Wendy Digre and Joyce Vogt. There were definitely more that could have been listed here because so many people loved and adored the Queen. Theresa will be buried next to her beloved grandmother and other relatives at Glen Haven Memorial Gardens in Crystal, MN.

The celebration of life memorial open house for Theresa Owens of Ottertail, will be held on Sunday July 12, from 4:00 until 7:00 p.m. at the Ottertail Community Center in Ottertail. A Time of Remembrance will begin at 5:00 with classmate Cynthia... View Obituary & Service Information

The family of Theresa Owens created this Life Tributes page to make it easy to share your memories.

The celebration of life memorial open house for Theresa Owens...

Send flowers to the Owens family.