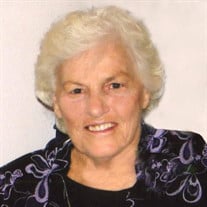 The funeral service for Velma Line of Verndale will be held at 11:00 a.m. on Saturday, February 23, at the Verndale Alliance Church in Verndale with Pastor Tony Stanley presiding. Visitation will be held at the church on Friday from 4:00 until 8:00 p.m. with a time of prayer and remembrance at 6:00 p.m. Visitation will resume at the church on Saturday from 9:30 a.m. until the time of the service. Velma, age 90, passed away with family at her side on Tuesday, February 12, 2019, at the Lakewood Health System, Staples, MN. Velma was born to Walter and Ruth (Furnas) Kellem January 6, 1929, in the family home five miles North of Wall, SD. She attended schools in Quinn SD, Sebeka MN, Venice and Compton CA. At the age of 16, her family moved to Verndale, MN. She was united in marriage with Joyce O. Line on October 19, 1949 in Verndale. They started their family on a farm north of town. In 1954 they moved onto the dairy farm that they purchased from Velma’s parents, where they raised their family of eight. Velma taught Sunday School for many years. She babysat for many local children and came to love them as her own. She and Joyce were members of the Central MN Beef Growers, and could be found frying hamburgers at the county fair and other local celebrations. She also served as an Election official at the Aldrich Town Hall and enjoyed being a member of the local Mystery Sisters Club and Homemakers Club. She was a huge fan of the Verndale Pirates and enjoyed watching all who participated. She was an avid watcher of the MN Twins. She enjoyed tending to her flower and vegetable gardens; cooking, baking, and canning the products of her hard work. Velma found joy in sewing, crocheting, and embroidery. She savored time with her friends and family, always having the coffee on for whomever came through her open door. She liked watching the birds and riding around on the 4-wheeler. She found peace reading her Bible. Velma was preceded in death by her husband, Joyce, on October 10, 2010; her parents Walter and Ruth; siblings Darrell, Dean (in WWII), Vernon, infant sister and a great-granddaughter, Grace. Velma will be remembered by her children, Donald (JoAnn) of Verndale, Anita Line of Verndale, Dwight (Mary Ann) of Wadena, Linda (Jerry) Korfe of Clarissa, Jerry (Diane) of Grey Eagle, Richard (Bonnie) of Staples, Mary (Dean) Sloan of Annandale, and Jennifer (Chris) Line-Chapman of Buffalo; 31 grandchildren, 65 great-grandchildren, 2 great-great-grandchildren and many nieces and nephews. Pallbearers will be Michael McGrane, Gabriel Line, Weldon Crider, Jamie Line, Symon Tschida, Dwight Line Jr., Sarah Eisenmenger and Sophia Chapman. Burial will be in Green Lawn Cemetery, Verndale, MN, with Pastor Daryl Jacobson officiating.

The funeral service for Velma Line of Verndale will be held at 11:00 a.m. on Saturday, February 23, at the Verndale Alliance Church in Verndale with Pastor Tony Stanley presiding. Visitation will be held at the church on Friday from 4:00 until... View Obituary & Service Information

The family of Velma Line created this Life Tributes page to make it easy to share your memories.

The funeral service for Velma Line of Verndale will be held at...

Send flowers to the Line family.