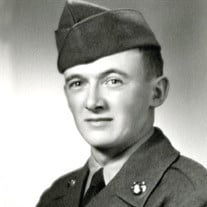 The funeral Mass for Victor Keppers, a resident of Fair Oaks Lodge in Wadena, and formerly of Bluffton will be celebrated at 11:00 a.m. on Saturday, January 19, at St. John the Baptist Catholic Church in Bluffton, with Father Aaron Kuhn as celebrant. Visitation will be held at the church on Saturday beginning with a Rosary at 9:30 a.m. And the visitation will continue until the time of the Mass. Victor, age 88, passed away with family at his side on Monday, January 14, 2019, at the Fair Oaks Lodge, Wadena, MN. Victor Hubert Keppers was born to Jerome and Marie (Fruth) Keppers on November 5, 1930, at Pearl Lake, MN. After high school, Vic worked on the farm until he entered the US Army and became a Fire Directions Operator in the 108th Field Artillery. He served his country honorably for two years, with 13 months of that time in Korea, during and after the war. Once stateside, Vic became a carpenter. In 1955, he moved to Havre, MT, where he and his brother, Urban, built and operated a roller skating ring for over two years. When his brother took up building computers and moved away, Vic continued to operate the skating rink until 1975. In September of 2013, Vic moved back to Minnesota. Vic had been a member of the Eagles Club in Havre, MT and the VFW Post 3922 in Wadena, MN. He was a lifetime member of St. Ann’s Catholic Church in Wadena, and the Catholic Order of Foresters. Vic’s favorite pastime was fishing and hunting and he had the trophies hanging on his wall to prove it! Victor was preceded in death by his parents Jerome and Marie; brothers Richard, Urban and Willard; brother-in-law Sylvester Krier; and sisters in-law Phyllis Keppers and Kathryn Keppers. Surviving Victor are brothers Ralph (Pat), LeRoy and David (Mary) Keppers; sisters Evelyn (Tom) Malone, Rita (Jim) Flanagan, and Virginia Krier; sisters-in-law Alice Keppers and Darlene Keppers; along with numerous nieces and nephews. Pallbearers will be John Malone, Steve and Sue Flanagan, Robert Keppers, Paul Krier, and Bev Malone. Military honors provided by the Elmer Goche Post 3922, Veterans of Foreign Wars, Wadena, MN. Burial will be in the St. John the Baptist Catholic Cemetery, Bluffton, MN. In lieu of memorials, the family suggests donations be made to a local Food Shelf.

The funeral Mass for Victor Keppers, a resident of Fair Oaks Lodge in Wadena, and formerly of Bluffton will be celebrated at 11:00 a.m. on Saturday, January 19, at St. John the Baptist Catholic Church in Bluffton, with Father Aaron Kuhn as celebrant.... View Obituary & Service Information

The family of Victor Keppers created this Life Tributes page to make it easy to share your memories.

The funeral Mass for Victor Keppers, a resident of Fair Oaks...

Send flowers to the Keppers family.